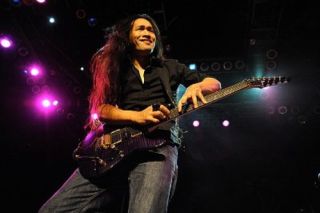 Ever wondered what goes into producing a Nintendo-tinged live power metal album? In this brand new DragonForce interview, guitarist Herman Li explains the method behind the madness on forthcoming live record 'Twilight Dementia'.

'Twilight Dementia' marks the culmination of an 11-year career for DragonForce that has so far garnered four studio albums and recognition as one of the world's premier power metal acts. Recorded throughout the band's most recent world tour, the two-disc set reflects a cross section of the 'Force canon to date, drawing on their 2003 debut album 'Valley Of The Damned', fan favourites from 'Sonic Firestorm', third album 'Inhuman Rampage' and 2008's 'Ultra Beatdown' . With the departure of vocalist ZP Theart from the band earlier in 2010, DragonForce are now set to progress to the next level of what will surely be a many platformed career. Here, Herman Li gives TG the lowdown on their killer new live album...

May the 'Force be with you

How did you decide which songs should be on this live DragonForce album, with so many in your back catalogue to choose from?

"We had an idea of what songs had to be on the live album based on which ones go down the best with the fans. It was the last leg of the world tour and we were doing songs from all four albums. We hadn't played a lot of the old songs for a long time, so we skipped some of the newer songs earlier on in the tour to refresh the old ones, so when it came time to record the shows we were well prepared. We actually recorded all 19 of the shows on the last UK tour, so we could pick the best performances later on, rather than record just one show and then realise it wasn't that great. It's so easy with the technology these days."

How do you get from recording a live show to the finished product?

"We had the Digidesign Avid Venue desk feeding into the Pro Tools HD system and recorded all the instruments direct to hard drive, so it's pretty easy actually. The hardest part was listening back to every single show, because we've already played the songs a million times and then we had to listen to them a million times. Everyone in the band had input into that part of the process.

"We each had a sheet of paper with the setlist from every single show. Everyone had to listen to the songs - there was no escape! - and give each song a mark out of 10. We then collated all the scores and chose the best ones to be on the album. When we were on the tour, sometimes we would say, 'Tonight we'll concentrate on this particular song for sure', and made sure that we play it and jump and run around a bit less, so there was a plan while we were doing it. We could listen back to it the next day and be sure that we had it.

"But certain songs didn't make it; 'Revolution Deathsquad', for example. We played it a few times, but when we listened back we decided it wasn't good enough. It just didn't sound as alive as the rest of the songs. Of course, we could have just overdubbed it, but we didn't want to do that. 'Heart Of A Dragon' was another one that didn't make it. So for all the fans that were wondering why those songs aren't on the album, that's the answer.

"After we picked the songs we gave them to [producer] Karl Groom, who we always work with on our studio albums. As we're so close to the songs, we really need a second opinion, so after Karl has mixed it how he thinks it should sound, I will go in and make my adjustments, like making the keyboard louder for a certain section for example."

How not to stage dive...

How much do you try to recreate the record when you play live?

"Some parts on the albums have, like, six guitar parts at the same time, so with there being just two of us, we have to adapt certain things. Doubled solos are a good example. Say Sam [Totman] does a solo and I have to harmonize it… because our techniques are so different, there are a few bits that we change a little bit, so that we both sound much more together. It's the same with one of my solos. I'll change a technique here and there, to better suit Sam's style. Then, of course, some of the solos change over time. After a year of playing the same solo it gradually evolves and changes, then you go back and listen to the original and it's not quite the same, you know?

"I also use a harmonizer for certain parts to reproduce some of the multi-tracked layers. I use a DigiTech Harmony Man, which is cool because I can take a feed from the keyboard and plug it into that pedal and it can detect the chord he's playing and automatically change the key. I keep it set to add a 3rd above and a 3rd below, so rather than having to adjust it manually, I use that auto detect function. It's great, but it's only for a couple of parts."

What's in your rig these days and what's the best piece of gear you've got lately?

"Amp wise, we still use the Rocktron Prophesy preamp and I use the Rocktron PatchMate, which switches in and out the analogue pedals, like the whammy pedal for example. It's not in line, it's parallel, so it doesn't squeeze the sound when I'm not using it. I also use the Hot Hands, which is the remote control ring and you can control the wah, volume and pitch shifter through the MIDI controller that plugs into the Prophesy.

"I think we play 10 times better now just because we just started using in-ear monitoring on this tour. We always had the problem that we couldn't hear what's going on and we want to put on a show and run around playing solos and stuff. If I run over to Sam's side, the stage mix is totally different, you know? You think you're playing it right, but you could never really tell. Now, with in-ears you're sure. If you hit a wrong note, you can hear it straight away and quickly fly to the right one. It gives you that reliability. Plus they're really good headphones for playing computer games!"

You guys are well known for your onstage antics. Any memorable moments from this tour?

"A few times we did '[Through The] Fire And Flames' as an encore, but I would be singing, Fred would be playing the drums and Sam would be playing the bass, and so on. Each time we did it, everyone had to have a turn of each instrument. It sounded like an absolute racket! Luckily, we didn't put any of that on the live album.I know people have done it before, but we did it even worse!"

"Actually, there was one funny moment in Canada. I think it was a sold-out show and usually when it's really packed I'll do a stage dive. This particular time I dived in, everyone moved out of the way and I landed flat on my back… but that wasn't the worst part. Everyone was trying to pull me up but they were standing on my hair. I'm screaming, 'Stop!' But they couldn't hear because the band was still playing. That was a bit of drama!"