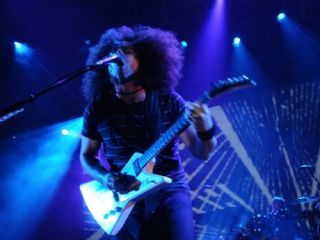 Coheed And Cambria are a hard-working band who once learned and performed four albums in four days. We caught up with guitarists Travis Stever and Claudio Sanchez on their UK tour supporting Deftones to get the inside scoop on what their life is like on the road.

How do you prepare for a tour?

Travis: "We've been on tour non-stop for the last two or three months. I don't really unpack, just do my laundry and throw it in the same bag!"

Claudio: "I make sure my wife and family are all set before I leave. I get my stuff together and make sure I have everything I need: my iPad and my recording hardware."

Do you write much on the road?

Claudio: "I try to. I think the most successful stuff is probably written at home. It's more like throwing ideas around on the tour rather than actual compositions."

How much do you rehearse before you leave?

Travis: "We did a few rehearsals after recording to run through the new songs. We've had rehearsals between a couple of the tours if we want to add songs, but generally we'll go over them in soundcheck."

What about pre-show routines - do you have any?

Travis: "I pace. I'm excited to play and I'm not very good at waiting."

Claudio: "I do vocal warm-ups. I might play a few chords and riffs on the guitar, but the focus is my vocals."

What happens with your backline? Do you bring it over for the UK shows?

Travis: "I'm using the Mesa/Boogie Mark Five, which I'm really excited about. The Mark Five kept blowing a fuse and I didn't have a backup for it so I had to use a [Mesa/Boogie] Electra Dyne. It's a great head, but it was missing what I was getting from the Mark Five. If I'd been in America, I could have got a replacement pretty quickly. So coming over here can be tough in that sense."

What other technical challenges do you face?

Travis: "I'm using my 'B' Rig effects, which I'm really getting used to. They don't sound bad. It's just a few pedals and my effects processor and I try to reproduce the sounds I get on my 'A' rig. It's different, but it's working."

The right songs for the right job

How do you pick the songs that make your setlist?

Claudio: "It depends on the tour - who we're playing with, whether we're supporting or co-headlining. We go with whatever makes sense for the total package. We're on tour with Deftones at the moment, so we'll pick songs that that complement playing with them."

Travis: "On a tour like this we stick to the same setlist because the majority of the people have never heard the band. On a headlining tour we'll change the songs quite a bit and do songs that people haven't heard in a while. We want people to say, 'Oh, wow! I didn't think they would pull that one out'."

What are your favourite songs on this tour?

Travis: "If we do a headlining show it could be any song; on this tour it's 'Welcome Home'. At least half the crowd haven't shaped their opinion on us yet, but because of the exposure [the song] gets from 'Rock Band', it registers with people so they get pretty amped up."

Claudio: "It's probably the more energetic tunes, because we're getting near the end of the tour and I know that when I get home I'm going to relax, so I want to get everything out of me before the winter. If I had to pick a song I'd say 'Welcome Home', too."

Are there any songs you're bored of that you keep playing because the fans like them?

Claudio: "Yes and no. We have such a dense catalogue that we can leave things out for a little while and I think our fans will still be satisfied."

Travis: "We've been playing 'A Favor House Atlantic' for years and we don't play it begrudgingly. It's not like, 'Oh sh**, here it comes'. If you're playing the same set for three months it might happen, but that's why we mix it up."

Your parts are close to the originals - do you ever vary them?

Claudio: "The original arrangements feel good, so we stick to them. I think that's what most people want to see."

Travis: "I have a 'safe' outlook when it comes to Coheed songs. They are what they are and my parts need to be that way to portray them live. There are a few songs where I play differently. On 'Ten Speed (Of God's Blood and Burial)' I'll put in little solo-y fills in the chorus and it definitely changes it."

What's the toughest song to play?

Claudio: "'This Shattered Symphony'. There's a lot percussive jumping around. It's supposed to be choppy but it can get too washy if I'm not on top of it."

Claudio: "We had just got in-ear monitors and they were really uncomfortable. I lost my balance and slammed my face into a monitor! I kept going, but I it made for a cool moment in the show."

Travis: "When I got really loaded, I would claim I was a botanist. I would take the plants from the hotel and create a forest wonderland in my hotel room. I did an interview and said, 'Some bands are anarchists, some are feminists… I'm a botanist'."