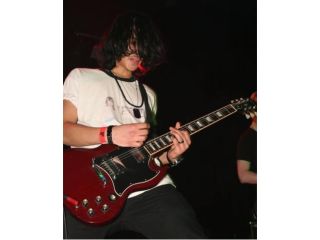 Neelesh Vasistha returns to talk about his experiences on the Guitar Higher Diploma course at The Institute, including his recent masterclass with Guthrie Govan.

For the last few years TG has sponsored a scholarship at The Institute (formerly ICMP and The Guitar Institute), one of the leading contemporary music schools in the country. In his second blog, our 2011/2012 scholarship student Neelesh tells us what he's been up to of late.

An audience with Guthrie Govan

Welcome back, all. I've been a busy boy the last few weeks. I was fortunate enough last month to get a seat at the Guthrie Govan masterclass at the ICMP. Now the word 'unbelievable' I feel, has lost its literal meaning and impact through gross overuse when describing something. It is, however, honestly the only way I can describe Guthrie's playing.

I'm not a huge fan of 'musician's music'. For me, it often veers towards self-indulgence, but Guthrie's abundance of musical taste coupled with his inhumanly refined technique is absolutely astonishing.

Taking stage with nothing particularly prepared, after a short performance of a song he opened the floor to a Q&A session in a room consisting entirely of guitarists. In response to various questions, throughout the two hours he exhibited an almost ridiculous range of styles such as funk slapping and metal, each one performed to the level of someone who was a lifelong expert in the genre.

I'm now in Term 3 of my one-year course here. The sh** has most certainly hit the fan in terms of workload. As we speed through Satriani and Pantera covers, I'm left wondering whether this is really the best way to improve technical playing.

Before I sound like I'm bleating or complaining, let me explain. When it comes to technique, watching and listening to Guthrie confirmed to me that certain motor skills (speed picking, chicken picking, etc) takes months if not years to develop. To rush these things for the sake of a performance or exam could quite easily lead to bad habits that could be very difficult to get rid of.

Stick around for the next blog, where I'll be telling you all about my festival plans for the summer, involving a certain videogame I may be involved in!