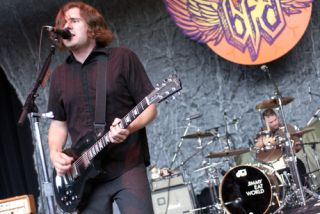 Mainstream-bothering emo stars Jimmy Eat World returned this week with a brand new album, Invented. As the album dropped, we got the inside word on the record from drummer Zach Lind.

Do you have a favourite track on the album?

"I like 'Invented' a lot. That's a great track. There's a song called 'Higher Devotion' as well that's really good. I think collectively we all feel really happy with the record though, so it's hard to pick a favourite."

How about purely from a drumming perspective?

"'Stop'. I think the drumming's really cool. I keep it pretty simple so I'm not doing a lot of elaborate stuff. I'm just trying to help the song. The drums on 'My Best Theory' as well. I felt really good about that track. I do some more elaborate hi-hat work on that song, it's a lot of fun. I try not to call too much attention to the drums. The attention should be on the collective music and the vocals."

Did you try anything different with your drumming?

"Also, Jim writes a lot of the music and he handed me a demo of 'Invented' where he played the drums throughout the song. It's a pretty simple part and if you listen to the album version, the first half is him playing the drums and the second half is me playing. I think he was a little surprised that I wanted to keep his drums. When Jim plays, because he's not a drummer, he sounds a little hesitant, but for some reason that playing in the first half of the song fits the song better. I'm not overly possessive of the drums being mine."

Was there a song that was difficult to lay down?

"'My Best Theory' was one of the harder ones. There's so much four on the floor, keeping things locked in. But really the album is pretty simple drum wise. It was just trying to get the right feel and getting the beats to match the song."

How about one that came together easily?

"The drums on 'Hardest Hard To Find' were really simple. They were just multiple floor toms. It was an instant idea and we left it like that."

Is there something on there that will surprise fans?

"I think 'Higher Devotion' will be a surprise. It has a falsetto chorus vocal and I think people will think that sounds a little different."

Does any one song stand out as one that you can't wait to play live?

"'Evidence'. It's so much fun to play. I think it's going to be a really good song live. I hope it is because we have a really fun time playing it."

Invented is out now.