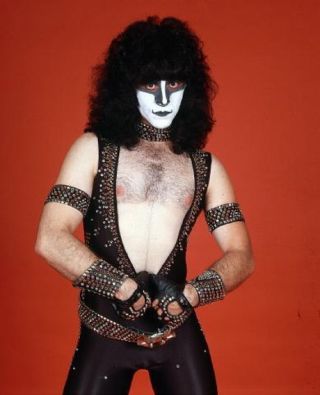 19 years ago this week the drum world lost one of its brightest stars - Eric Carr. Carr cut his teeth in the CellArmen, Smack and Flasher before landing the Kiss gig, replacing the much-loved Peter Criss.

Carr was soon taken to the Kiss army's hearts, helping steer the band through difficult transitions and massive success, all while dressed as a spandex-clad, poodle-permed fox.

But, by the time the '90s rolled around Carr's health took a turn for the worse. In 1991 he was diagnosed with heart cancer and despite aggressive treatment and continuing work with Kiss, he tragically died in November 1991 - aged just 41.

Now, 19 years on, we've doffed our caps to The Fox by looking back at some of his finest moments - just try watching this without a smile creeping across your face.

Released after Carr's tragically early death, 'Carr Jam 1981' shows him indulging in a rare spot of soloing in the studio. Cut from a 1981 jam session, the track surfaced on 1992's Revenge album. Pretty impressive stuff.

Not only was Eric a hugely talented sticksman, he could also pen a tune as well. Oh, and he didn't have a bad set of pipes on him either. Check out 'Little Caesar' (written and sang by Eric) to see what we mean.

Say what you like about this one, it was a huge hit for Kiss and Eric laid down an equally huge beat to underpin it all.

An early '80s effort from a rather unfamiliar looking Kiss. Not only had they ditched the make-up (come on, who honestly thought that was a good idea?), they'd also began to edge towards a harder sound, thanks in no small part to Carr's influence. Having said that, single 'Lick It Up' is pure pop rock and the video includes some of the biggest fashion disasters you'll ever seen - leopard print cowboy boots anyone?

Pretty much as iconic as Kiss tracks come, this one features Eric. But, while he is seen behind the kit in the promo clip, it was Eric Singer that recorded the drums for the monster smash hit. However, Eric can be heard chiming in with backing vocals in what was one of his final contributions with the band.