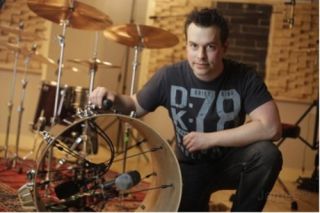 Confused by what mic does what in the studio or on stage? Producer Jason Wilcock guides you through what you need to achieve the ultimate bass drum sound.

These are relatively inexpensive, durable and can withstand high sound pressure levels, and hopefully the odd accidental stick hit (still try to avoid that if you can drummers!).

These microphones do not require power, and have a moderate output level so they can be used on loud instruments without a pad to reduce level.

They work very well on close sound sources, but are not great at a distance.

Condenser microphones range from cheaper 'back electret' microphones, to valve based microphones at the top of the price scale. As a general and unfortunate rule, the more you spend, the better they sound.

All modern versions require 48v Phantom power (supplied by preamp or mixer) with the exception of valve based microphones which usually require an external power supply.

The large diaphragm microphones are often more flattering for vocals and when a less precise pickup is desired. Medium diaphragm often sit in the middle, making them a good choice if you can only afford one pair of condensers.

Condensers generally pick up more detail, and often have an extended high frequency response. They have a high output level which makes them useful for recording quiet or distant items with a low noise floor.

Ribbon microphones were some of the earliest microphones developed., starting at the mid price range and ending almost at the top.

They have the simplest electronic design; an actual physical ribbon. Ribbon microphones are typically figure of eight (pick up evenly out of the front and the back) But there is an exception with the Beyerdynamic M160 which is Cardiod (Front Pickup Only).

Two Beyerdynamic M160s were used exclusively to record the drums for Led Zeppelins legendary 'Levee Breaks' So that might give you an idea of the tone of these.

Ribbon microphones have an exceptionally natural sound, almost like that of our own ears. They are typically darker than most condensers, and unlike dynamics work very well at distance from the source. They are however the most fragile of the three types.

The ribbon element itself is extremely thin and sensitive to being stretched or even snapped by blasts of air. Air pressure is a different issue to maximum Sound Pressure Level (SPL). Some ribbon microphones such as the Royer R121 are even designed to withstand the volume of a guitar amp but don't put it inside your bass drum!

Use a pop filter wherever you think there might be air blasts. As long as they are treated with care they will last a life time and whilst fragile, the ribbon is inexpensive to repair in contrast to other microphone types.

Ribbon microphones require the most gain from a microphone preamplifier, with the exception of some modern 'active' designs which use additional electronics to boost the signal level.