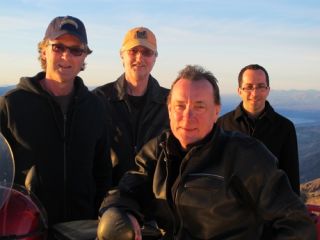 The end is in sight for Hudson Music's Joe Bergamini as the work on Neil Peart's new DVD Taking Center Stage comes to a close. And so does our The Making Of series with Joe, as here we present the final part. You can catch up on parts 1-4 on our main page. And here is part five.

"That night we gathered for a final dinner, all of us sitting at the same long table. The occasion called for an extra glass of wine for all of us (which Neil added on top of, I suspect, a private Macallan or two in his room). Interestingly, Neil and I had both battled colds during the entire shoot, and one of our cameramen, Jeff, had experienced a serious bout of food poisoning on the first day, yet after the incredible experiences we had shared together over the past two days, all of this was forgotten about as we talked and laughed. When our drinks arrived, Neil raised his glass to toast and thank all of us, and to say that this trip and shoot was one of the most wonderful experiences of his life. I glanced at Paul and Rob, and saw that they were as deeply moved as I was."

"Well, after the brief encounter of the next morning which I described at the beginning of the story, we had pretty much reached the end of the exciting stuff. Neil went back out on tour with Rush, and I delved into the post-production process with our long-time editor Phil Fallo and veteran sound engineer Sean McClintock, both of whom put in countless hours on this project. With Paul and Rob overseeing each step, I called in our long-time transcription and engraving assistant Willie Rose to help with the PDFs, and communicated regularly with Hudson's Al Giordano, the unsung hero who gets all the important yet uncelebrated details of projects together for us, from booking flights and arranging shoot locations to getting printing and design templates and specifications for the packaging, and countless other important details. (And I must mention that Neil loves Al's dry New York wit.) It is pretty much all careening towards the finish line at this point.

"Having viewed the nearly seven hours of the final program, cut together in breathtaking fashion by Phil, I truly believe that this is one of the most incredible drum DVDs ever made. The bulk of the program consists of the songs and the show, and it is amazing to see how segments of video that were shot in three different locations over the course of a year have come together in such a perfect way."

"Each song has its own chapter, which begins with Neil in Death Valley discussing the specific details of the drum grooves and fills contained in the song. For each of these grooves or fills, there is an accompanying drums-only demonstration (from his rehearsals), both in real time and in slow motion, that clearly allows the viewer to see everything that Neil is doing. Each of these demonstrations is also accompanied by a transcription and an included PDF that is keyed with on-screen icons for clear identification. Once Neil has discussed and analyzed all of the sections of the song, we watch him perform the song in concert in Saratoga, seen from only the drum cameras, and with the special audio mix I described above (with the drums turned up). I guess I can sum it up by saying that when I was a kid, I wished there was a video that showed all of this. As it turns out, I can't believe I got to help make it.

"I can't thank Neil enough for trusting me to work on this project with him, and for the respect he has shown for my work as a player, editor, and educator. It has been a thrill and an honour to spend some time with him. I hope that this DVD will be an educational and motivational experience for everyone who watches it. Thanks to Neil's ability to explain and discuss his ideas in such articulate and detailed terms, I think this DVD will be hugely interesting not only to drummers, but to all Rush fans, and even people who are simply curious about an examination of the creative process presented in a uniquely scenic and eloquent fashion.

"Finally, I sincerely thank my two bosses, Rob Wallis and Paul Siegel of Hudson Music, for making one of my dreams come true. What an unbelievable journey it has been. I can't wait for everyone to see this thing! If, like me, you ever wore out a copy of Exit Stage Left as a kid, I think you're going to be pretty amazed."

For more on Taking Center Stage, including how you can win a copy signed by Neil plus other Peart goodies, look out for the November issue of Rhythm.