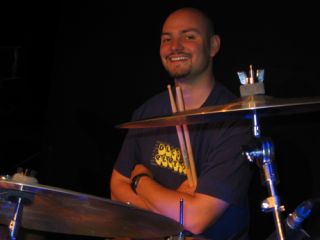 The UK has been embracing Indian culture over the last few weeks thanks to the runaway success of new musical Britain's Got Bhangra. With audiences captivated, theatres full to the brim and critics spouting nothing but praise, the show is one of musical theatre's success stories of the year so far. Rhythm caught up with the show's drummer Stu Roberts to get the scoop on the demands of the gig, its fantastic reception and how he manages to switch between Bhangra, drum'n'bass and hip-hop with his trusty rock snare.

How did you get the gig?

"I used to play for a band called The Dhol Foundation and one of the keyboard players in the band got the call to write the score for the musical and he was keen for me to come bring that Dolls Foundation element to the show."

Was there an extensive rehearsal period?

"The first week was just the band and the musical director. That was good and interesting. It took us a week to get through the two hours of music. Then it was a week with the band and cast and then a week with everybody in. Hopefully by the end of that we had it nailed!"

Does the show's variety help keep the gig exciting and enjoyable?

"Definitely. All through the show you've got to keep on your toes. One of the things with theatre is that it's quite easy to zone out, all the time it's pretty much the same stuff. But because this is wide ranging, it makes it interesting. We've got some Afro Cuban 6/8 grooves, we've got some drum'n'bass, some hip-hop, some complex Indian rhythmic structures and all that sort of stuff. It's a huge range of style. There's even four bars of swing amongst all the madness."

What kit are you using on the tour?

Have you had to adapt your sound specifically for the show?

"Probably one of the main things is I'm using clear heads to get quite a poppy tom sound where I'd normally use coated. There's Moon Gel on the toms and an O ring on the snare for a very dry sound. The other thing is the musical charts the history of Bhangra music so I try to mirror that with the drum sound. There's points where I tune the snare down and put a towel on top so it gets a real dry sound then as it moves to the end of the show I tune the snare up and take the O ring off and it's quite fat."

What have you made of the reaction to the show?

"There's been loads of good feedback. All of the national papers have given it a really strong review and the audience seem to enjoy it. I think because it's something very different it stands out. It's fast paced and seems to have captured people's imagination."

Are there any plans beyond the current run?

"It's booked up to the middle of July and then there's rumours about it possibly doing another tour or going to the West End, but that's often the case in musical theatre. Until it's completely 100 percent it's hard to know what's rumour and what's reality."