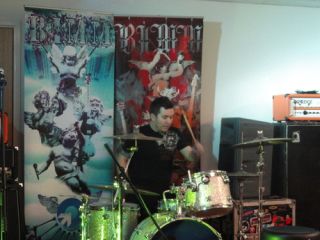 Funeral For A Friend drummer Ryan Richards put on a special masterclass on Friday and Rhythm was on hand to catch the whole thing.

Ryan spent the afternoon with students at the Bristol Institute of Modern Music, jamming through a few tracks - including Funeral For A Friend's 'Rookie Of The Year' and System Of A Down's 'Aerials' - before taking questions on everything from his progression as a drummer to how Funeral signed their first record deal - for a fiver.

Just before he took to the stage we grabbed a few words with him and he told us the event was his first ever masterclass.

Ryan explained: "It came through a friend of mine Mark Clayden who used to tour manage Funeral For A Friend. He asked me if I'd be interested in coming in and speaking with the students and having a jam.

"That's what I love doing, I love jamming and it's great to see people so interested in becoming a live musician. I don't want to call it a job, it's a path that I'd recommend to anyone and if I can help anyone in anyway or enlighten anyone to the areas of being a full-time musician that's great."

We'll be back at BIMM this Friday to catch the always-entertaining Karl Brazil put on a masterclass.