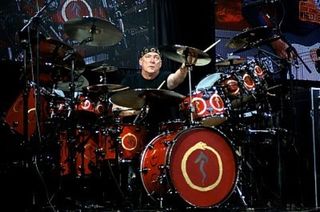 Rush may have been snubbed once again by the Rock and Roll Hall of Fame earlier this week, but the prog power trio will be honoured as Living Legends at this year's Classic Rock awards.

Fresh from the powers that be deciding to omit Neil Peart and co from the Rock and Rock Hall of Fame once again, this year at the expense of this year's Classic Rock Awards host Alice Cooper, among several others, Rush will be honoured by Rhythm's sister title.

Editor-in-Chief of Classic Rock Scott Rowley added, "Ridiculously, Rush haven't yet been inducted into the Rock And Roll Hall of Fame - so it's an honour to recognise their massive contribution to rock music at the Classic Rock Roll of Honour."

The show takes place in London on 10 November, with performances from Alter Bridge, Cheap Trick, The Union and more. Head to www.classicrockmagazine.com for more details.