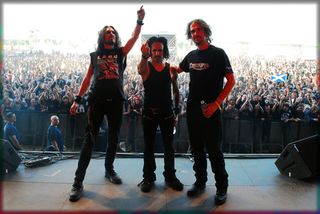 Roy Mayorga has helped metal icons Amebix put together their first brand new record in almost a quarter of a century. Take a look below for a sneak preview.

Amebix released their last album way back in 1987, but a batch of 2009 reunion shows with Roy behind the kit saw the band reignite the flame and head into the studio. The project sees the Stone Sour sticksman not only at the drumstool but also sat in the engineering and producing chair.

You can see Roy and co hard at work in the studio in this clip.

We spoke to Roy all about the process back in Rhythm 187, which you can order right here. Amebix will release new album Sonic Mass later this year, with single 'Knights of the Black Sun' out in June.