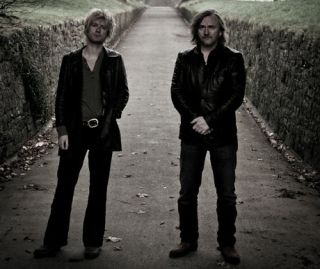 Who are they? Former Thunder, Winterville and Big Linda classic rockers back and sounding even more classic than ever.

Why should you check them out? Because they plain and simple rock. Former Thunder axe-man Luke Morley remains a six-stringed force of nature, while the velvety vocals of Pete Shoulder bring some much-needed modern rock sensibilities to the party, moving The Union away from the glam rock territory that they'd have been firmly planted in had they opted for a screamer to front the band.

Drummer Geoff Holroyde adds some pounding drum work (and plenty of ridiculously large hair) to the mix, taking over from Quireboy's drummer Phil Martini who laid down the beats for The Union's recently-released debut album.

And what a fine album it is as well. But, if you want to see these guys at their best, check them out on their tour this autumn and prepare to be blown away. Just ask the tens of thousands of punters that were left open-mouthed at the High Voltage and Sonisphere festivals earlier this summer.