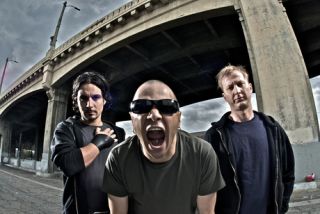 Who are they? Canadian power trio back with their fifth album.

Sounds like: Absolutely soaked in groove, new album Below The Belt is track after track of head down rockers, each packed with ridiculously over the top lyrics and balls to the wall backbeats from Cornelius.

Why should you check them out? After more than a decade as fringe figures, 2010 could be the year that Danko Jones arrive as major league players. And it's about time. Canada's finest, now on their fifth album, have toured relentlessly since their 1996 inception (getting through four drummers in the process), churning out anthem after anthem, but always falling just short of delivering a full album's worth of hard rockin' material. Until now that is.

The band's sound and sneering attitude can be pretty much summed up perfectly by 'I Think Bad Thoughts', which features rock solid playing alongside the kind of lyrics (I can rip you off and steal all your cash/suckerpunch you in the face, stand back and laugh/ leave you stranded as fast as a heart attack) that make you think these guys will rock you to within an inch of your life and leave you bleeding in the gutter. But then again, nice boys don't play rock 'n' roll.