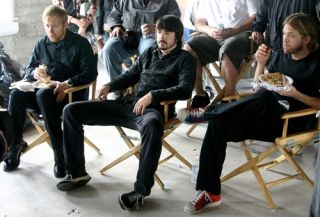 With new album Wasting Light not only their finest output for more than a decade, but also a return to their hard-edged roots, now seems as good a time as any for Foo Fighters to release this career-spanning documentary.

Going right back to Dave Grohl's time in Nirvana through to the recording of Wasting Light, we get everything in 90 minutes, the good, the bad and the ugly.

There's certainly plenty of good, with tonnes of early concert footage and candid interviews with each band member giving you a reminder of how the Foos become such a rock monster.

Refreshingly, few punches are pulled, and here comes the bad and the ugly. Earlier this week Taylor Hawkins said he was uncomfortable with the movie's release, and you can see why as his overdose and subsequent near death are recounted in detail.

Grohl would also have been squirming in his seat at times, especially as former Foos drummer William Goldsmith recalled his drum tracks for The Colour And The Shape being binned and re-recorded without his knowledge.

There's also the band melting down and almost calling it a day as the One By One sessions dragged on and Grohl headed on the road with Queens of the Stone Age.

It's these insights, those which show the band as a living, breathing unit that has ran through some bad times, that make Back and Forth so utterly watchable. They're scenes that 99% of bands would have left on the cutting room floor and swept under the carpet, but the Foos have put themselves out there, for better or worse, warts and all. And for that they must be commended.

The final 20 minutes or so gave an in-depth behind the scenes look at the recording of Wasting Light (sessions which looked an absolute blast, by the way), before as an added treat Grohl, Hawkins and co slammed through the record in its entirety, completely live and unedited. It was a fitting end, and one that showed just why the Foos are the biggest rock band in the world.