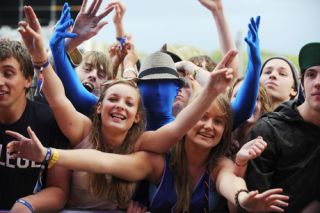 Taking a look through the line-up for this year's Reading and Leeds festivals can be a confusing task. With six stages and reams of bands it's hard to know who you should check out. Well' we've done some of the work for you, taking a look away from the main stage at some of the hidden gems.

If you don't fancy embracing the rap rock revival with Limp Bizkit and Cypress Hill over on the main stage, you could instead check out Band Of Horses as they bring their laid-back indie stylings to the NME Radio 1 tent. Latest album Infinite Arms is just the tip of the iceberg of what Creighton Barrett and co can achieve, we wouldn't be surprised if these guys are elevated to lofty main stage status sooner rather than later.

Everything Everything (Reading: Saturday, Leeds: Friday)

Back in Rhythm 178 we told you all about these guys, and since then they've dropped their awesome album Man Alive. Mike Spearman's well-schooled chops help the UK indie jazzsters meld all kinds of genres and turn it all into mainstream-bothering pop tunes. Nice.

A band we've had our eye on for a while here at Rhythm HQ, one thing is for certain, Trash Talk's Reading and Leeds appearances will be memorable. Not averse to being kicked out of venues for simply being too bone-crunchingly over the top, these hardcore up-and-comers have built themselves a reputation on being an explosive live act. Definitely one to miss at your peril.

UK two-piece (yes they do manage to make such an awesome noise with only two of them up there) Little Noise headline the BBC Introducing Stage this year, check out the video above to see exactly why they've been cherry-picked for such a slot. Yes, the drumming is in the most part stripped back and simple, but that never did Meg White any harm did it? But then that's a whole other can of worms, isn't it?

Ok, we admit it, headlining the Lock Up stage isn't that hidden, but nevertheless we have to flag up Bad Religion as a must-see set. Drummer Brooks Wackerman has injected all kinds of musicality and subtlety since joining the punk legends' ranks in 2001 - just check out the reggae-fused 'Sorrow' to see what we mean.