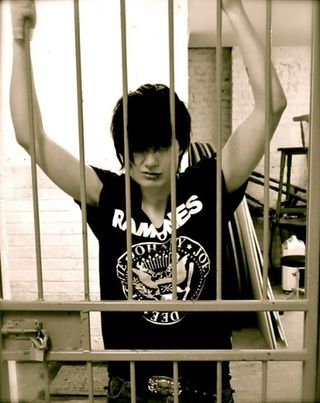 As the band prepare for the show drummer Kate Wilkinson checked in with Rhythm to give us the lowdown on what is sure to be one hell of an evening.

On how the show came about, Kate reveals: "Richie Ramone emailed me at the start of the month to say he loved what we (the Ramonas) were doing, and that he'd love to play a London show with us on 29 November. I remember skim reading the mail, not taking in the name properly, thinking who is this? Then I re-read who had sent it and thought, 'F*** it's Richie Ramone and he's asking us to play a show with him?!! Wow!'

"I called the girls up, and we were all so shocked but happy! I guess the rest is history really, we're learning an amazing set list for what promises to be an awesome show at the Underworld. "

Kate adds: "We're gonna all meet up with Richie on Monday night for the first time and then play the show on Tuesday, so it's gonna be wild!

"Richie and I will be sharing drumming duties, playing half the set each. Richie is gonna be doing some awesome versions of some of the Ramones songs he wrote with the band, as well as some classics tunes like 'Sedated' and 'Blitzkrieg Bop'. He's also gonna be singing up front for a few songs, this dude has a wicked voice! We're gonna be using my SJC custom drums for the show, they sound sweet!"

You can catch the show at London Underworld on 29 November.