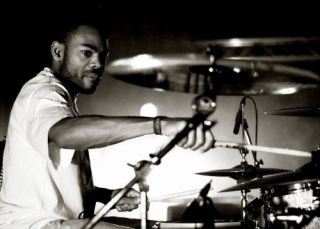 He may have experimented with more styles than Nicky Clarke, but funk stands out as UK session star Paul Jones' passion.

Whether playing to packed-out stadiums with popsters Cleopatra, backing up soulstress Mica Paris or laying down the beats for US funk-jazz legend Don Blackman, Paul's unmistakable funk-drenched grooves are ever present. So, who better to talk to when it comes to how to make it as a funk drummer?

As well as having an indisputable funk groove, Paul's career has seen him prove himself as one of the UK's most versatile players, bagging gigs in everything from pop and rock to soul and funk, and just about everything in between.

Ahead of his latest batch of dates with Mica, Rhythm got the lowdown from Paul on his funk heroes, how he first discovered the genre and the kit and skills funk drummers need to make it.

How did you first begin playing funk?

"It all began with Level 42. If I remember correctly they were the first band I ever saw live in an arena, after that I ended up buying all of their albums and fell in love with Phil Gould's drumming. Soon after a great friend of mine Francis Hylton (bass player for Incognito) introduced me to all manner of funk, including more obscure James Brown stuff, Chuck Brown and The Soul Searchers, The Meters, Graham Central Station, Pleasure, The Commodores and Kool and The Gang.

"I discovered Tower Of Power a little later on when I joined Salford College of Technology. To be honest joining that college blew my mind, because suddenly I became exposed to musicians from all over the country and then things really started to open up."

What do you feel is key to funk drumming?

"Nice dynamic contrasts between strokes, sexy ghostings and - of course - feeling the quarter note. Syncopation obviously plays a big part, but to be honest, good funk for me always happens when the player is able to feel the spaces between the notes. Just playing a million notes a bar doesn't automatically give you funk! Bernard Purdie is the king of playing the spaces."

How do you think the current crop of funk players compare to those from the past?

"There are some great drummers out there, with amazing facility. Funk has mutated and grown with the changing genres and demands for the today's tight swung and metronomic grooves with a much greater sonic range needed in the kit sounds.

"Three particular players that embrace both the new and the old and help push the boundaries for me (but definitely within funk realms) have to be Adam Deitch with his pocket and flair, Keith Carlock with his phenomenal touch and explosiveness with the ability to turn a groove inside out and Chris "Daddy" Dave who has mind-blowing facility and crazy displacement skills!

"Today's funk leans more heavily to gospel influenced music. And there are lots of great cats out there. Teddy Campbell, Aaron Spears and Gerald Heywood are leading the way. One thing's for sure though, the big names from the past definitely had plenty of time for feeling the groove and weren't always thinking about setting up the next hit, leave that to the big band drummers!"

What is the most important piece of kit all funk drummers need?

"The snare, has to be the one for me. Tight, or fat sounding, ringy or dampened. But a nice sounding snare is essential."

What advice do you have for young funk players?

"Check out some of the veteran players, you will definitely gain a great sense of the feel and time they have. Work on playing with different dynamic levels. Learn a few basic rudiments and mess around with your grooves, pick them apart, start from the ground upwards and add then subtract elements one by one. Enjoy yourself."