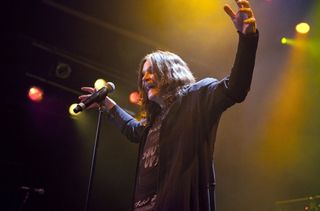 After catching up with Steel Panther's Stix Zadinia (keep your eyes peeled on this site for that interview later this week), we made it out in time to catch the final few songs from main stage openers Skindred. Despite seemingly being dressed head to toe in tin foil, the UK ragga metallers are absolutely on fire. Frontman Benji Webbe makes compelling viewing, although the sight of drummer Arya Goggin sat behind a gorgeous Tama Starclassic kit also takes our eye and leaves us with a puddle of drool at our feet.

It's hard to believe that it's only been just over a year since Steel Panther brought heavy metal back with their debut album Feel The Steel, such is the frequency of their trips to the UK. Today they're having a ball, and while they're not at absolute top form, they're still ridiculously entertaining. And ridiculously disgusting.

From spandex-clad hair metal to make-up covered ghoul rockers The Murderdolls. Joey Jordison shows off his six-stringed skills, but we can't help but wish he was back behind the kit. Not that there's anything wrong with the 'Dolls drummer Racci Shay, but come on, Joey has just been voted as the Greatest Drummer of the Last 25 Years! That said, Joey and co put in an entertaining 45-minute set that may be high on clichés but it's also packed full of hooks, with the fantastically catchy 'Summertime Suicide' the highlight.

Korn enter Ozzfest with possibly the loudest pyro we've ever heard. They follow it up with an equally explosive 60-minutes filled with cuts from their acclaimed new album and classics from the vaults - the closing trio of 'Blind', 'Shoots and Ladders' and 'Got The Life' is jaw-droppingly awesome. In the midst of all this Adidas track-suited nu metal, Ray Luizer beats the hell out of frankly beastly looking set-up. Simply awesome.

We were slightly concerned when on the eve of this show Tommy Clufetos told us that Ozzy has been in 'agonising pain' in recent weeks. But, he also told us that the Ozzman was 'Mr Showman', so we really needn't have worried. Double O throws himself around the stage tonight as if he'd turned the clock back 30 years. His voice may be a little shakier than back in his prime, but he's still one of the most engaging frontmen out there, and he's still got it in him to lead his band by the scruff of the neck through a two-hour show - bar a nice 15-minute break during Clufetos and guitarist Gus G's solo spots. If we were the types to pick fault (which we are) it'd have been nice to have heard one or two more from this year's Scream album, but there's a decent mix of Sabbath and solo Ozzy tracks, and you can't really criticise someone for having too many good songs, can you? No you can't.