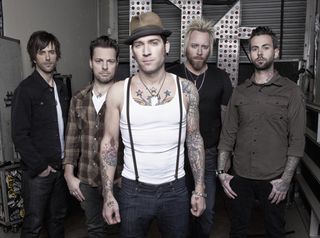 On 13 August 2009 Lit drummer Allen Shellenberger tragically passed away after a year-long battle with cancer.

It's fair to say that Allen's relentlessly enthusiastic, never fail to make you smile playing, as well as the horrendous circumstances, meant a mighty daunting challenge for whoever the California rockers brought in as their new drummer once they had decided that they would be continuing the band.

Enter Nathan Walker. The new boy linked up with Lit in 2009 and has just came out of the studio as the band cut their fifth album, The View From The Bottom.

Ahead of the record's release we chatted with Nathan to find out all about the album, his playing and replacing the irreplaceable.

Can you tell us a little about your drumming background?

"I started playing drums when I was around 11 years old. I took pretty much every music class you can think of in middle school and high school. During that time I was listening to a lot of The Descendants and ALL. Bill Stevenson was a huge influence on me growing up. But I would jam out to all kinds of stuff from punk rock to mellow stuff like Ben Harper. Just trying to get some grooves down.

"I would also go to as many clinics as I could when I was younger, I remember seeing Tony Royster jr. when he was super young doing a clinic with Dennis Chambers. That was insane! I tried to take in as much as I could when I was starting out, but there came a point when I needed some private one on one lessons.

"Right out of high school I started studying with Mike Johnston in Sacramento. That changed everything for me, finally learning proper technique and of course getting all the rudiments down. I couldn't have asked for a better experience working with Mike. After working with Mike for a couple years, I've just taken what I've learned and picked up fills and grooves along the way.

Obviously there were tragic circumstances prior to you joining the band, but how did you become involved with Lit?

"I became involved with the Lit guys about nine years ago or so. I had moved from Sacramento to Orange County, CA to play in some bands. I met the Lit guys along the way and became instant friends with them all. I had traveled with them on the road a little bit just hanging out with the guys, it was awesome. I got to know everyone really well over the years. Allen was gracious enough to get me in contact with some drum companies he was playing such as Vater and Aquarian a long time ago, and I've been playing that stuff ever since."

Given the circumstances it must have been a difficult position to step in to?

"It was a difficult in the sense that I wanted to make sure I was doing Allen proud, I actually sat in with him during shows because at the time hephysically couldn't get through a whole set. Him watching me play his songs was interesting, but I know I got the stamp of approval from him. Knowing that and talking to him about it made things a bit easier. But of course at the end of the day, I would love to see Lit with Allen. I'm trying to take my style of playing and make it work for Lit, which I think people are diggin' it. I try to keep all of the songs Allen played to be as spot on what he played. I definitely don't stray too much, I loved the parts that he came up with, and it's really fun to play."

What kind of kit sound were you going for on The View from the Bottom?

"Big and heavy, for sure! And I think it was accomplished. Some of the songs that call for it, they definitely have the big drum sounds that they need. I'm really happy with how the drums sound on this album."

Did you try anything drum or gear-wise that you hadn't before?

"I didn't get too crazy withexperimenting on sounds or gear or anything. Kept it pretty traditional in the studio. I switched out some snares when need be, and some different tuning techniques on the snares. After the song it recorded, you can do what ever you want with the sounds, but as long as you have a good kit in the studio, you're good to go. Working with Butch Walker, he knows the sound he wants. And we all dig it and trust what he wants. As long as he was happy with my drum part, I know the rest will be great with however he wants to tweak some sounds of the kit."

What kit were you using in the studio?

"I used my Sonor SQ2's on this record. It's my favourite kit I have ever played, it sounds killer. All birch shells, and I used a 13" rack, 16" and 18" floors with a 24" kick. The primary snare I used was the Sonor bronze artist series snare. I had used a few other snares, but pretty much stuck to that one. Other than the kit, used Sabian cymbals, Aquarian drum heads and Vater drum sticks."