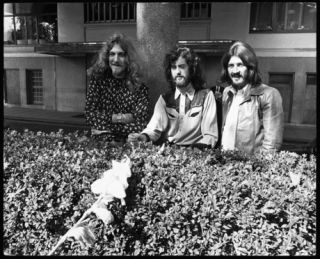 This month's Rhythm features a huge John Bonham/Led Zeppelin IV cover feature. To further honour the legendary Bonzo, we sat down with his friend Bill Harvey to get an insight into the man behind the legend.

When did you first meet John?

"I first met him in Redditch. I'd been to see a friend's band and John walked in, 15 years of age, small and wearing his suit. The band introduced me to him. He was very quiet. We sat and had a talk about things. He was still at school and he told me to go to his house and he'd show me his drum kit. I went up and he had a new Ludwig Green Sparkle kit."

What were your first impressions of him?

"My first impressions that he was just average, really. He was good at the rock stuff for his age but nothing outwardly remarkable. At that time I was more advanced than him. I was 20. But I was more jazz and he was rock. His rock rhythms were really good. We continued to meet up and rehearse for a few weeks, whenever we managed to get the time. Just showing one another things. I was showing him jazz and he was showing me some rock stuff. He was a likeable lad."

And you regularly saw John play around that time?

"There was a bit of a break from seeing him and about a year later he got with a band and at Redditch Youth Club my band would play one week and his would play the other. One night I was in the audience and John introduced me onto the stage and we did a solo together. When we came off John said, 'How did you know what I was going to do?', and I said, 'I've watched you so many times, you do the same things!'

"He told me to come watch him rehearsing in the caravan in his back garden. He suggested we rehearsed something and if we were both there we'd get up a play this solo and we'd pretend to people that we didn't like each other. And that's what we did, people didn't realise it was all rehearsed! Then one night I put my fist through his tom tom. I said, 'John, I am sorry'. He said, 'Don't worry about it, just turn it upside'. And that's what he did."

Is it true that John sat in for you at a gig once?

"I broke my finger and John sat in for me at a wedding. He had to play the wedding dance type stuff. He'd have been 16 or 17 then. The other time was when I was with a band called Blue Star and we had a falling out and I left and John took over for me."

What are your most enduring memories of John?

"When we went to gigs he'd kick the drummers off the stool and tell them how they should be doing it. He was forceful in the way that he was very confident in what he wanted to do. He'd experiment a lot. Nowadays bass drum pedals have chains on and everyone thinks it's a new idea but John thought of it and he had these wonderful bass drum triplets. I asked him how he did it and he showed me that he'd taken the strap off and put a bike chain on instead and by putting his foot in the middle of the pedal he could get these bass drum sounds."

Did you carry on seeing John during the Zeppelin days?

"I went to his house a few times during the Zeppelin days. He had this wonderful coffee table and he used to practice paradiddles on it. I think he had one or two other drummers round doing the same thing as well."

Do you have any favourite tracks of John's?

"Not a favourite track but his main drum solo came from part of the stuff that we'd done years back. I'd played a solo on a song called 'Caravan', an old jazzy number and the whole concept of it was to use your fingers and hands in the middle. I'd got that from Joe Morello. I showed it to John and he wanted to do it. I showed him and he came back the next day with his fingers all bandaged. He'd hit his fingers on the edge of the cymbals instead of the top! He said, 'Oh, thanks for telling me that now!' But then he got the hang of it and used it. He had the concept of building a solo as a picture and not just banging. He reckons he played the 'Caravan' solo, but it was me!"