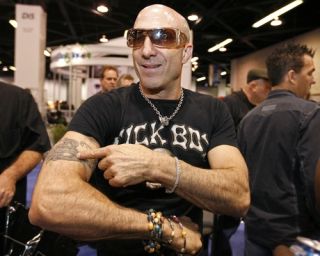 Kenny Aronoff has given an insight into the reunited Van Halen, and it doesn't sond like things are completely harmonious.

Aronoff, who is of course now working with former VH bassist Michael Anthony in Chickenfoot, revealed to the VH1 Radio Network that he has had first hand experience of the classic rockers' return.

He said: "I was in the studio when they were recording, I mean, I know my buddy who started producing it, John Shanks, and then I know the guy who was mixing it, Ross Hogarth, and I was hearing all kinds of stories.

"They played one song for me and it was good, but the thing I was hearing was stuff like, you know, it's the whole I just heard the classic stories, my buddy finally was told to leave, the producer, and he heard about how people would get fired and he was like, 'It happened to me, too!' And then the engineer would deliver the mixes. There was the David Lee Roth camp and there was the brothers' camp."