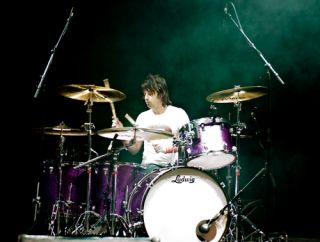 Jason Sutter is living his dream. The likeable Los Angeles-based session star has made his name playing with the likes of Chris Cornell and Foreigner, but as we sit with him backstage as he prepares to take to the stage with yet another dream gig - the New York Dolls - we can't help but get the impression that with the Dolls he's found one hell of a match.

How did the Dolls gig come about?

"Morrissey got the Dolls back together and there was another drummer (Gary Powell) doing the gig that Morrissey had set up. Keith Carlock was doing a gig, kind of a lounge thing, with David (Johansen) and then Keith got busy and called a buddy of ours Brian Delaney who started the gig. When the Dolls decided to keep the reunion going David was like, 'Hey Brian do you wanna give a this a go?' So Brian ended up putting his rock hat on and doing the gig. I ran into Brian and told him I'd love to do the gig because I was a huge Dolls fan. Brian was having a baby this summer and couldn't do the gig and I literally finished the Foreigner tour on a Sunday and Brian called me on the Tuesday so I jumped on the tour. It was one of those dream come true kind of gigs. It's funny that a lot of my friends in LA are doing gigs playing music they don't like at all. It's a great gig but you might be playing with Josh Groban or something. So for me I've been really lucky to do gigs with bands that I have on my iPod."

This gig must be a big change from Foreigner

"Coming off Foreigner this is such a refreshing gig because it's so loose and authentic. Foreigner was a little cleaner. One of the coolest things about this gig is getting to play with the Dolls but also that Earl Slick is playing guitar and Kenny Aaronson on bass - these amazing New York sidemen. Every day this summer was like rock history lessons."

How about the differences in terms of drum sound?

"Foreigner was more the drums were tuned super low and flat, real '70s/'80s vibe. Otherwise though I use the same set up, a Ludwig 26", 14", 16", 18" very Bonham, Black beauty snare and giant Paiste 2002 cymbals. As far as how I play it was autopilot because while Dolls changes night-to-night Foreigner was the same, from the stage banter to the songs, everything was the same. With this gig anything can happen. T's more raw and from the heart and gritty, which is where I started as a drummer."

"I started listening to the records and learned a bunch of songs. It wasn't until I went on YouTube I realised that every version I watched was different, the tempo, the arrangement, it was all different. Unlike Foreigner with 'Cold As Ice' that has been played the same for years, with the Dolls it's always different. They're so edgy that every time they start a tour they re-learn all of the songs. It's always different and that took pressure off me because it's always new to them. We had four days of rehearsals which with the Dolls involved a lot of coffee, a lot of cigarettes and very little playing. It would be play two songs then a coffee break. We hung out a lot and drank a lot of coffee. It was cool to hang out in New York too because I'm a New Yorker but I've lived in LA for the past ten years."

How did you make sure you got the gig?

"When I got called by Brian he was putting my name in the hat but it wasn't a done deal. For me to get the gig I told him that I wanted them to know I was from New York and I was willing to pay to get to New York myself to audition and I was willing to put myself up in New York. Otherwise I knew they might go for someone that was in New York so they didn't have to pay for those things. I wanted to cut down as many strikes against me. A lot of times as a drummer in this business to get ahead you have to pay to play to get in there. So I did, I used frequent flyer miles to pay for the flight and stayed over with a friend. You need to do no matter what to keep yourself in the game."

You were on the road with the Dolls, Poison and Motley Crue this summer, was that as crazy as it sounds?

"It was amazing. You dream as a kid of going on these big rock tours and I remember s a little kid a guy tapped me on the shoulder and said, 'Hey, I know you're a drummer, you've got to check this out.' It was Too Fast For Love. From there I really got into the first two Motley Crue records. If it weren't for the Dolls there wouldn't be a Motley Crue. Look at the back of that record [Too Fast For Love] it's basically four Johnny Thunders! Which is awesome, I think it's one of the coolest looking records."

"With the Dolls it's like a gang. I mean literally, at rehearsals Earl Slick has a switchblade on his amp and a knife in his boot! These guys are the real deal, no question. It was great to watch these guys and how they perform on and off stage, they're really classy and made me a part of that gang right from the beginning. I made sure I savoured being on the road with these guys."