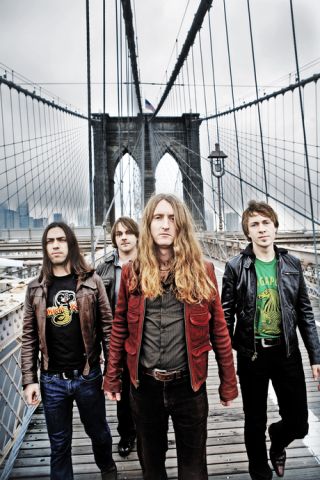 The Answer burst out of Northern Ireland's club scene and into the rock mainstream back in 2005 at a time when the falsetto-squeeling, spandex-clad crossover appeal of The Darkness had opened the door for classic rock.

Of the droves of retro-drenched bands that emerged the Northern Irish four-piece are one of the few to have gone from strength to strength and not slip away into a sea of smeared eyeliner and disgaurded leopard print strides.

Two killer records, a mammoth world tour with AC/DC and now they stand on the cusp of delivering their third album. We caught up with drummer James Heatley for the skinny on the making of the follow-up to 2008's Everyday Demons.

Tell us about the new record

"We recorded the album in El Paso in January. The plan was to do a week or rehearsals. On the second day the producer said it sounded amazing so we just started tracking."

"The first album e did in London and some stuff in Wales and there were a lot of distractions. The second we did in LA and it was the same, so we wanted to go somewhere where no one was going to come and see us. We were there five weeks and recorded 19 songs. It's our most interesting and exciting stuff to date."

Did spending two years on the road with AC/DC impact the new material?

"We were learning from the masters every night. There's no us trying to do 'Back in Black' but that information, still gets into your head every night seeing how it's done. I think the first writing session for the album there was a real conscious effort by everybody not to play anything that sounded like AC/DC. That was partly wrong because if you listen to our first and second album there are bits of AC/DC in The Answer. There always has been."

How is the rest of 2011 looking for The Answer?

The album is going to master next week. We've got the DVD coming out. It's behind-the-scenes of us on the road with AC/DC. There's stuff that people that love AC/DC and The Answer wouldn't normally get to see. And there's a lot of live stuff as well. The album's out in September and then we'll have a proper tour.

Going back to the 'DC tour, you had a bit of a medical emergency by breaking your hand, didn't you?

"We finished a run in Spain with AC/DC and flew to Japan and did two shows. I went to a clinic and they couldn't really work out what was going on. I thought when I got back I'd get it sorted. They gave me these pads with morphine in them and I guess that numbed it and I did the gigs. We came back and did the two gigs at the O2 with AC/DC and hats when I realized something was definitely wrong. Dave our manager got me into a physio and they couldn't work out what was wrong. They thought it was broken but I didn't have time to sit in A&E for six hours so I did the two shows! The final night it went was when we did the O2 in Dublin later that week and my hand was twice the size it should have been. I went to the hospital and it was broken. A friend came in, it was very hard for me to let someone else come in, But I only missed six shows, although one of those was to 93,000 people!"