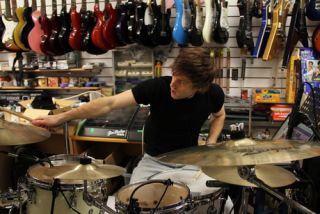 In addition to this month's article, I also wanted to share with you an interview I did with a fellow UK Online Session Drummer, Matt Snowden. Matt is a great player with an engineering background and I hope you find what he has to say as interesting as I did! I should say that although he's relatively new to Online Session Drumming. Matt is one of the best established drummers in our gang, and has a better set up than me. So if you're reading about his studio (and that Neve desk, hubba hubba) thinking 'blimey, I can't afford THAT', then you don't need to worry. People are doing fine with a fraction of what Matt has at his disposal as well.

"I started playing when I was 11 (I'm 33 now)... I'd had a few years of piano lessons from the age of 8, but the moment I had a go on my neighbour's Pearl Export, I knew I'd found the instrument for me! After pestering my parents, I was rewarded with a battered old Premier kit and weekly drum lessons...I carried on with lessons until I was 15, so I had the basic rudiments down, then carried on teaching myself, mainly by listening to records and playing along. I'd play along to my favourite bands, dreaming about playing stadiums and touring the world.

"I joined my first proper band soon after starting college (studying Performing Arts), playing the usual mixture of rock covers, but I was also asked to be the resident drummer for a local jam night at a new pub in town that was getting a reputation for live music. £30 a week to turn up with my kit and play with whoever turned up...my first paid drumming work! Out of these jam nights, I was asked to join a soul / funk band, and a year or so later, when I was 17, we got signed! My dream looked like it was coming true.

"The next few years were amazing, travelling to London, playing some great venues, recording in some great studios, and meeting famous people, but also a time of learning some very harsh lessons about the music industry. We were in what I would later recognise as 'development hell'. Endless recording and writing and rehearsing, but never getting a record to the point where the record company thought it was ready to release. A combination of frustration with the record company and fractured personal relationships within the band, meant we split up when I was 20, still without having released a single, let alone an album.

"So what to do next? I'd made a few contacts to do a little bit of session work, but not enough to make a living. I'd always wondered what the guys on the other side of the studio glass were actually doing, so I decided to do a Music Technology BTEC, which I then followed with a degree at London College Of Music and Media. Since graduating in 2003, (after an initial year of being a runner) my work has been a combination of music engineering / mixing, post production (mixing audio for tv and radio), and drumming! I've been privileged to engineer for the likes of Pete Townshend, Amy Winehouse, Julian Lennon etc, I've been very lucky."

How long have you been doing the Online Sessions thing? Why did you start?

"I've only been doing it six months, and it's all thanks to Tim. I saw one of his adverts on Facebook, got his book, and quickly put together a website. Being both an engineer and a drummer, I can't believe I hadn't thought of doing it before, it's such an obvious way of combining the two skills into a small, profitable business! So thank you Tim!"

You have a quite established engineering background don't you? How has this helped with OSD'ing and how are you exploiting it? In particular, do you think it has affected your 'recording ear'?

"It meant I had the infrastructure and skills to hand to make OSDing work for me very quickly. I setup the website beginning of April, and had my first paying customer very shortly after. Obviously I have free or cheap access to studios that a lot of OSDs may not, and I've been recording and mixing drums for years, both myself and other drummers. Also, I've also been using Pro Tools for the best part of a decade, so editing takes together/fine editing takes me less time than an OSD who is new to DAWs. I've always been fascinated by drum sounds as well as drum patterns, and am constantly researching how my favourite drum sounds were made. I'm a massive drum and technology geek basically!"

What sort of projects do you find yourself doing most often?

"I would say that 80 percent of it is singer songwriters, 10 percent producers, and 10 percent bands who don't currently have a drummer. The majority of all of it unsigned. I have to say I've been really impressed by the quality of material from unsigned artists. I thought I'd be having to play on some really ropey stuff, but the quality is consistently high."

How and how often do you advertise?

"At the moment, I'm not advertising much as I'm not looking to do the OSDing full time, due to engineering commitments. I find I have enough work coming in through google search, word of mouth, and most importantly repeat business from existing customers."

Where do you record?

"I have a smaller studio in Brighton I use for most jobs. It's quite a small room, 10 x 12, but its been acoustically treated well enough to sound great, so a carefully positioned room mic adds a great tone. I spend a great deal of time there getting the drum sound right for each different track. I really try and avoid getting Drumagog out and doing sample replacement, I believe its worth taking time out to get the drum sound right, rather than fixing in the mix! And then I have my more expensive option, which is when I dry hire a friends studio in East London called The Way. It's a fantastic studio full of vintage mics, amazing outboard, 2" tape and a 1970s Neve 8078 desk, as used by Neil Young, Led Zep etc."

What inspires you with your videos? The one on your front page in particular is absolutelyincredible! Nice, short and action-packed. How do you choose the songs?

"Thank you! I realised from Tim's advice, the first thing I needed to do was make some videos, and I needed the one on the front page to have real impact. I've always loved The Dirtchamber Sessions mix album by Liam Howlett, so many great soul / funk / rock / hip-hop tracks! So I cut a 15 minute sequence from that down to 5 minutes and played along. The full 5 minutes is on my videos page, the last 50 seconds on the front page. A lot of people said it looks a lot of fun to play to, it really was!"

You also have an angle that no other OSD seems to be promoting - the 'vintage' option. Tell us about that?

"Yup, that is my more expensive option at The Way studio. Obviously at £150 a track, this is one of the most expensive OSDing rates out there, but it's still cheaper than renting a studio of that calibre, an engineer, and a drummer for the day! I dont get a huge amount of bookings for that option, a lot of enquiries, but I do find a lot of people settle for the cheaper option. Hopefully if and when the economy picks up, I'll see a lot more people being able to justify the expensive option. I'm guessing that's quite a long way off though!"

What are your plans for your drumming and music in the future?

"At the moment I'm happy building up the OSDing slowly, at the moment I'm averaging one (long) day a week, I'd like to build that up to two a week soon. I'd also like to get back into playing live more, I did a few festivals this year, but would love to go off on a few tours next year."

Where can people find out more about you?

"My website (which is due a major overhaul!) is at www.online-drums.com. There's also bits and pieces that pop up if you google me. And of course, people are more than welcome to drop me an email if they want a chat."

To get a copy of Tim's book 'Paid to Play Drums: The World of Online Session Drumming and How to Get Started' go to www.PaidtoPlayDrums.com, where you can also download the first chapter free.