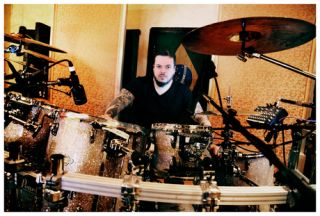 The mighty Igor Cavalera has this week returned as Cavalera Conspiracy dropped their new album Blunt Force Trauma. We sat down with Igor to talk about making the record, his set-up and how sometimes you just have to hold back.

What were the most challenging aspects of recording the album?

"It's very difficult for a drummer sometimes to hold back. You want to put fills and cymbals in as much as you can. It's like an addiction, you have to hit things, like a junkie. Live I can be a little more junkie and let myself go."

How did the record come together?

"It came together very quickly. Max (Cavalera) grew a lot as a producer. He's an amazing producer now. He knows exactly what he wants. We toured a lot with this line up and going into the studio with this line up was very pleasing."

Are there any tracks that stand out as favourites?

"I keep changing which tracks I like most. I'm really into the one with Roger from Agnostic Front ['Lynch Mob']. For me, I love the combination of the voice of Roger and Max together. That track is just insane. 'Killing Inside' for me is very special because I did some industrial percussive things on it so it has the crazy vibe to it."

What set-up did you use in the studio?

"I used my typical drum set, which is a double bass with two 20" kicks and the big toms which are actually floor toms hat I mounted. There's an 18" in the middle with a 16" on the right and a 10" on the left. Then I've got two crashes and a china. Very basic for what I do. I tried for a deep sound. I can't really change the heads during a show so I have to go a little higher on the tuning but when I'm in the studio I go a little lower. I changed the heads every time I did a song in the studio, I wish I could do the same live."

"We're looking forward to the summer and a lot of festivals are starting to line up for Cavalera. I'm also doing my other project which is more experimental with different beats like African and electronic. It's a full year for me and I'm really happy to be working with my brother and doing many different things all year."

For more from Igor order yourself a copy of Rhythm 187.