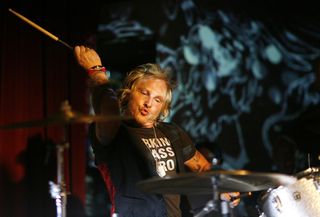 That Matt Sorum is one busy dude, isn't he? Not content with his already galaxy-sized musical legacy Sorum has been hard at work with two bands (no, one of them isn't Velvet Revolver).

Sorum, who also recently moved into the art world, told Rolling Stone about his work with Diamond Baby, a band fronted by his long-time partner Ace Harper in which Sorum takes on the name Baron von Storm.

The drummer explained: "My former name and my former musical background I probably couldn't do as much. I wanted to kind of dabble in a different music area. So the rock side of me is the other name — I really felt like more of a Ziggy Stardust kind of character with this."

Check the band's debut, and star-studded, video below.

Sorum also recently headed to Brazil to record with Kiara Rocks. You can see him performing GN'R classic 'You Could Be Mine' with the band below.