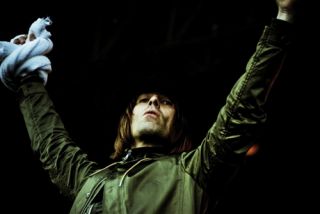 Never one to shy away from bold predictions, Liam Gallagher has turned the attention of his huge, sweeping statements to the drum world.

When asked by Q magazine who he thinks should be responsible for the future of rock 'n' roll the Beady Eye mainman answered, "My kids mate. They're gonna have it."

He added: "My little boy Gene is a drummer. He did his first gig the other day at school.

"He got up in front of 200 people at the school, first gig ever and he was drumming as well as the 14, 15 year olds. But whereas they were all f***ing s**tting it, he got off and went, 'Yeeeeesssss man.' Big round of applause."

We're waiting to hear whether Gene is readying his application video for the Young Drummer of the Year competition.