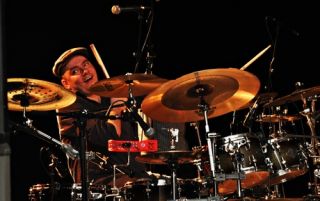 With their highly acclaimed 'Thunder Duo with Dom Famularo' DVD globally available through Hudson Music Digital (NY), Gabs performing in major shows in London, Kornel's CD Songs of Moment revealing his stunning percussion prowess, and now received an invitation to perform with Terry Bozzio on DrumChannel in Los Angeles, we thought it timely to get in touch with Gabs to find out about his never-ending schedule.

So what has been happening with Thunder Duo since we last spoke?

Many things! Our DVD has been getting five-star reviews everywhere - including Rhythm, and we've been getting standing ovations at international drum festivals and on our European tours. But the most unbelievable thing is that Kornel and I have been invited by Don Lombardi to perform and record live with Terry Bozzio on DrumChannel in Los Angeles, California! I think Terry and Thunder Duo approach music in a similar way, so we're expecting something very interesting to come from this.

And Hudson Music is distributing your DVD?

Yes, Thunder Duo with Dom Famularo DVD (Hunnia Records) got such a great response, so Dom sent it to Hudson Music, who offered us worldwide distribution under the Hudson Digital brand. It's fantastic for us that the DVD is now downloadable everywhere in the world and the Thunder Duo name is on the Hudson roster alongside Gadd, Weckl, Erskine, Horacio and many more amazing players.

Yes. I drummed on the Michael Jackson 'Thriller Live' World Tour production for a couple years but wanted to be back in London and do different things. Fortunately I was selected for deputy positions on two big theatre productions, We Will Rock You and Rock Of Ages, where I dep for two marvelous British drummers - Tony Bourke on Rock You and Chris Maitland on ROA.

Plus you've launched a private drum school in London?

It's important that today's professionals pass along information to the new generation. I originally started teaching when I was seventeen, but by then I had already been studying and playing for seven years. I have twenty-five years of experience playing jazz, funk, fusion, rock, latin; just about everything, and it's cool to be able to share that.

What can we expect at Thunder Duo's upcoming UK dates?

We're going to play our hearts out! (laughs) In addition to introducing the new Player's Choice cymbals from Sabian, we will be playing tracks from our DVD plus new material, so you can expect all sorts of cool world rhythms and funky/fusiony grooves. It's a musical rhythm 'n' groove mix you won't hear anywhere else. God bless and see you at one of our UK dates!