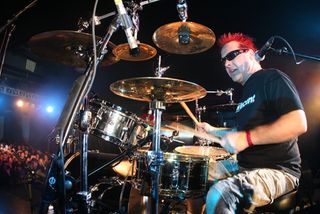 35 years in and still braving the swarms of gob, The Damned are back out on the road this month to celebrate their 35th anniversary. This year sees The Damned mark 35 years as punk pioneers. We sat down with drummer Pinch to find out what you can expect to see.

"It is definitely a step up for us but I think it's justified because we generally do a lot of shows in the UK. Everywhere we go we have great feedback from everybody."

How about new material?

"We've done a couple of new records over the last few years and to be quite honest I don't think people give a toss! They're like, 'Oh great you're still alive, well play my old favourites!' It's kind of a shame but we just enjoy playing live and no two gigs are the same. We're not one of these bands that goes on tour and you'll hear the same things from the singer every night. Even the bodies of the songs themselves, we'll do jams within them. I think keeps it fresh, especially for people following the tour around, it keeps it exciting for them. We don't know what we're going to do, so they don't know what we're going to do."

"I get to indulge all of my drum nerd gear fantasies because Scabies played on a big kit so to recreate what we did with all the signature fills, I need a big kit, so I'm more than happy."

What set-up will you be using on the tour?

"I've been with Spaun for about six years. They're a great company, the quality of their gear is incredible. In the first six months of this year I didn't really have anything going on so I thought I'd go work at Guitar Center for a little bit. So I saw every piece of equipment form every manufacturer, some good, some bad and it made me realise what great drums Spaun are. My kit is one of their maple/acrylic hybrids with clear acrylic centres and maple bearing edges. It's an 8", 10", 12" rack, 14", 16" floors. They've made me a Damned 35th anniversary snare drum which is really exciting. It looks great and sounds amazing. It's a 14"x7". I wanted tube lugs on it because the whole idea of the drum is that it's got a ticket from every year that The Damned played, 35 tickets for 35 years so I wanted to show that off. It's blown me away. I've been with Zildjian for 15/16 years as well now and I swapped out my cymbal set up for the tour to use a bunch of their ReZos. That's the thing about doing the Guitar Center stuff because I get to weed out the stuff I like and the stuff I don't. I think the ReZos really work."

And what else do you have on the way?

"The band I formed when I was 15 years old was called English Dogs and we're going out in the States for our 25th anniversary. We were really the first band to cross over punk and metal. As thrash was emerging we were at the cutting edge of it and I was really the first punk drummer to use double kick drums. Initially it was frowned upon, but then it was like, 'Oh, this really works.' After 25 years I'm re-learning all my double bass drum chops and we're touring in February."

For more from Pinch look out for the December issue of Rhythm, on sale 22 November.