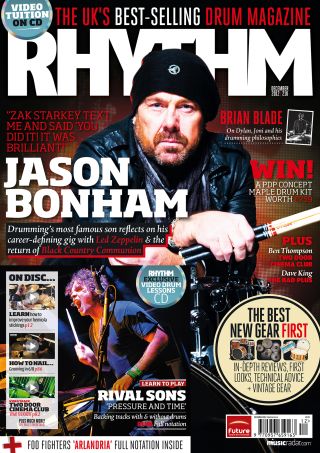 10 December 2007. Led Zeppelin returned to the stage for a one-off, name your price for tickets, mega sold-out show. When it came to replacing the irreplaceable John Bonham behind the kit there was only one man for the job - his son Jason. This month, as the long-awaited DVD of said show is released, we chat to Jason about that huge show, as well as how he has grown as a songwriter and the future of Black Country Communion.

This month you can learn how to nail Foo Fighters' 'Arlandria', Rival Sons' groove-fest 'Pressure and Time' and Two Door Cinema Club's 'What You Know'.

This month you can bag yourself a PDP Concept Maple kit worth £750!

All this and more in the December issue of Rhythm available now from all good newsagents, online or digitally from Apple Newsstand.