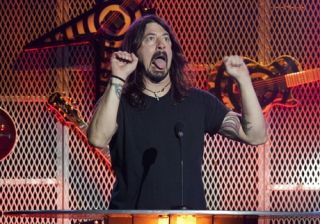 This is fantastic. Dave Grohl spotted a troublemaker in the pit at last night's Foo Fighters show and responded in the best possible way.

Grohl's eagle eye picked out one gig-goer starting a fight in the pit at last night's iTunes festival gig in London, promoting Grohl to stop the show and kick him out.

XFM reports that Grohl's response was: "You don't f***ing fight at my show you asshole. Let me see him, who's fighting right now? It's that guy in the striped shirt. Hey motherf***er look at me, get the f*** out of my show right now.

"I don't put up with that bullshit - you people came here to have a good time and that guy can f*** off."