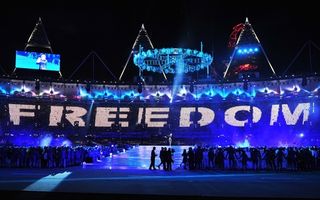 On Sunday the curtain came down on the 2012 Olympics with a huge concert crammed with some of the biggest icons of British rock and pop.

One man who took to the stage (in front of a packed stadium and TV audience of billions) was George Michael drummer Carlos Hercules. We fired a few questions at the sticksman to find out what it was really like inside the biggest gig of the year.

What kind of preparation went in before playing such a huge show?

"We had got together at Air Studio to brush off the cobwebs as we haven't been on the Symphonica tour George had been doing. It felt amazing to get the old unit back together like slipping on old comfortable shoes.

Presumably it all had to remain under the radar

" There was a lot of secrecy about the closing ceremony but we were given the heads up about three weeks before and then came the necessary security protocols."

It looked like an incredibly event to be part of

" I've done many prestigious events in my career thankfully but the atmosphere back stage was amazing. We were joking it was like being at a school reunion with the most respected icons of British music film art and fashion. Everyone was buzzing but friendly and all in awe of the magnitude of the event.

So there was plenty of hobnobbing backstage?

"I was chilling talking to Nick Mason and Roger Daltrey and catching up with Annie Lennox looking over at the Spice Girls, Kate Moss and Naomi Campbell it was surreal. I had gone front of house earlier to soak in the atmosphere and inevitably bump into friends that are crew doing the vitals that they do to make it happen but when you walk out to the full stadium it's electric. After our performance the crowds were high fiving us as we left it was lovely.

"I travelled into London via the train for the couple of rehearsals we did and found even that such a pleasant experience listening to people sharing their Olympic stories with me and other strangers. I truly hope we can keep some of that warmth in the city now the games are over."

Were there any pre-gig nerves given the size of the gig?

"I did get a little nervous at the magnitude but the moment we started the response was amazing you just couldn't helping smiling. Thanks to George and the 25live tour we did, I'm well prepared for that size of physical crowds but it's when you realise that its going out globally that you go ok it's a biggy!

"I have to say I thought we did ourselves proud. I so enjoyed watching the Games in London. Frankly, I know it'll never happen again in my lifetime and so to be part of the closing ceremony playing for George Michael, well it really doesn't get any better than this does it?