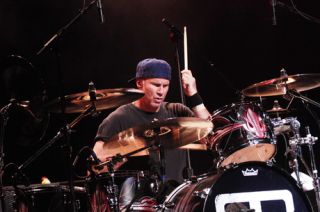 Not only is Chad Smith one of the most revered drummers of his generation, in recent years he's also become one of the busiest.

A look at his 2010 schedule shows that much. As the year enters its second half Chad has the studio in his sights as new albums from Chickenfoot and Red Hot Chili Peppers begin to take shape. Of course he also has his acclaimed instrumental side project the Bombastic Meatbats to keep him busy as well.

In light of the funky as hell drummer's purple patch, we've taken a look back throughout his career and pinned down our pick of his many memorable beats.

The groove to end all grooves. Chad at his funk-fuelled best. Not his most technical work by any means, but the swagger and constant trading with Flea make this a stone cold classic. Check out this live version filmed at Slane Castle. Partly because it rocks and partly because the alternative is the song's promo video which contains Chad sporting devil horns and an abundance of silver spray paint.

In a career soaked in funk, this is just about as funky as it gets, which really is pretty damn funky. 'Suck My Kiss' just about has it all, but it's the syncronised riff stabs and pre-chorus fills that really set it apart from the rest.

The title track of the album that catapulted the Peppers back to mainstream acclaim after a decidedly dodgy time in the mid 90s, this was always going to make it in this list, wasn't it? Of course, Chad's use of subtle ghost notes coupled with a full on ride-snare chorus attack also helped.

Fulfilling a lifelong dream and clearly enjoying every second of it, here we see Chad lay down the beat for former Deep Purple man Glenn Hughes. From the opening flam to the crash-filled chorus, this shows what Chad's all about - hard, heavy beats with a definite groove. For our money Chad's most successful moment of his collaborations with Hughes, something which is no doubt helped by the presence of former Chili Peppers sparring partner Dave Navarro, with whom he locks in effortlessly.

As debut single from Chad's much-hyped project with former Van Halen men Sammy Hagar and Michael Anthony and the axe-shredding enigma that is Joe Satriani, 'Oh Yeah' had a lot to live up to. Thankfully, the foursome delivered a swaggering slice of blues-tinged classic rock that featured vintage Chad. Hard and funky before spicing things up with an offbeat-filled final section, 'Oh Yeah' sidestepped all of the usual…*cringe* supergroup pitfalls, simply by being a straight up great rock song.