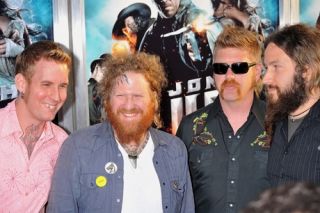 Hold on to your ear drums, Mastodon's are hard at work writing and recording the follow-up to the incredible Crack The Skye and according to Brann Dailor what they've come up with is 'extremely heavy'. Nice.

Dailor told the German edition of Metal Hammer: "When you listen to the songs, they don't sound as 'fun' as we perceive them to be, I guess; it's still pretty extremely heavy material." He added, "We had a few songs that were kind of, not left over from Crack The Skye, but just stuff that we wanted to be on that album, but that album kind of took on a whole different thing of its own and there were a few stragglers that were super-heavy and crazy that didn't make it, and we finally got to put them on this record. And then we wrote a whole bunch of brand new stuff.

Mastodon's new album, which is titled The Hunter, is slated for an October release.