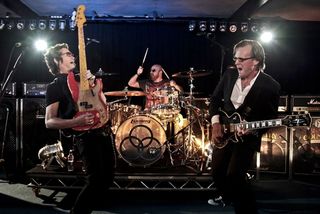 It's not every day you see rock and blues heavyweights like Glenn Hughes, Joe Bonamassa, Jason Bonham and Derek Sherinian sharing a stage. It's even rarer to check these guys out in a miniscule rehearsal room in front of just a few dozen people.

That was exactly the setting in which Black Country Communion made their UK bow last night, reeling off a few choice cuts from their Black Country album in a sweat-drenched, sardine-packed, BO-filled show.

Bonham pounded his way through a set of hard rockers with Popeye-esque raw power - it was hard not to wince as he subjected his gorgeous Ludwig kit (check it out below) to such punishment. He even threw some pummelling double bass and plenty of textbook technique in there as well, showing why he's a revered drummer in his own right.

Up front, Hughes and Bonamassa kept the vocal gymnastics and blues noodling to a minimum, leaving a stripped-back set of rockers, which is exactly what these guys do best.

'One Last Soul' and 'Sista Jane' illustrated that point perfectly, while the obligatory John Bonham reference came after 'Medusa' - a song that Hughes pointed out he regularly played with Bonham snr the best part of 40 years ago.

With the cobwebs dusted off, Bonham and co departed, but not before Hughes hinted that a UK tour is in the works. With Bonham readying his Led Zeppelin Experience tour for later this year and Bonamassa and Hughes both having solo jaunts on the horizon, it's difficult to tell exactly when they'll fit time for that in, but here's hoping they're back on these shores soon.