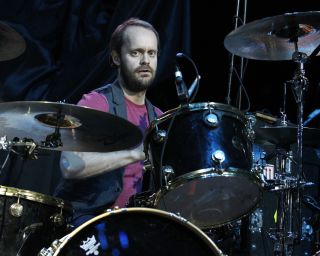 McMurray behind the kit with Ash (Image credit: Sayre Berman/Corbis)

Rick McMurray may be pop rock royalty thanks to his beats for chart toppers '90s favourites Ash, but that doesn't mean he isn't still experimenting.

And his new project is certainly experimentation. The Red, The White and The Blue (which also features Feeder bassist Taka Hirose) have just released their debut album, and an accompanying comic book to go with it. We tracked down Rick and got the lowdown on the interest piquing project.

How did The Red, The White and The Blue come about?

"Paul Cronin just got in touch with me and sent me a few demos. Ash had a bit of downtime and I liked what he'd sent me so I thought , "Yeah ill give this a shot."

What was the thinking behind releasing tracks alongside the comic book series?

"Well that is down to Paul, not me! But he told me that as he was writing the songs they began to take the form of an episodic story and fit in with the comic idea. I think it's a great idea the way he's done it. It's great for me despite knowing the music to see it come out alongside the comic. It feels like a great package."

Do you think it's more important than ever now for bands to do things a little differently? Obviously in the past you've taken a different route from the traditional album-tour model with Ash's A-Z Series.

"I think things are wide open for artists to do things in non traditional ways now; technology has advanced so far it's only the limits of the imagination that are the boundaries. I'm surprised more people haven't come up with pioneering ideas in recent years. I think what drew me to the project was the fact it chimed with what Ash had done; it was great to work with someone who had the mindset to try a new approach to music making and releasing."

What kit/set-up did you use for the album?

"We used a DW kit which was one of many in house kits at ICP Studios in Brussels. They had such a range of stuff there I could have geeked out for a week trying stuff. We only had a few days to record the album so luckily Ed Buller knew the gear well and wanted to use the DW.

"It was nothing out of the ordinary gear wise; just my normal kick Snare rack floor combo, but it was a real buzz to be able to nail an albums worth of material in two days."

How much did the concept of the tracks and tying that in with the comic book influence your playing and beats on the album?

"I think the feel and mood was already there in the songs written for the project as each was specific to the storyline. My job was just to do the feel of the songs justice. Paul had me in mind when he was looking for a drummer and thought I my playing would suit the material. Hopefully I've been able to do that."