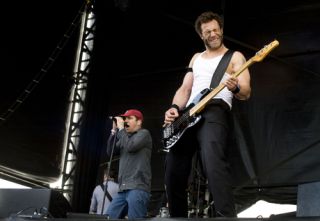 The Bloodhound Gang will return with a Greatest Hits album just after Christmas and a brand new record later in 2011, drummer Adam Perry has told us.

Perry, who was recently back out on the road with A, said that the best of package will include a new track, before an album's worth of new material is released in 2011.

He said: "Then we'll start touring that straight away. It'll get very busy. I'd imagine we'll be touring all next year.

It seems can expect more of the same from the band, with a typically eclectic mix of rock, hip hop and dance tunes.

As well as a new record and full tour with the 'Gang, Perry also expects to be hard at work with A in the coming months.

"We're talking about doing a tour in April. I think he want to do a small tour in April and a bigger tour in October. That's the plan. I think there's still enough appetite out there for A to come out and play every now and then. We just need some new music now to get people interested and get some new kids on board. We'll start looking at that before Christmas and see what we can do."