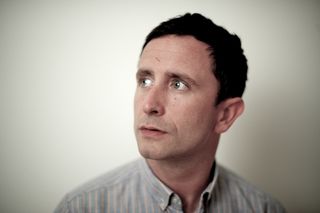 Babyshambles drummer and London Guns DJ turned Roses Kings Castles frontman Adam Ficek is back with a brand new solo record, British Plastic. To mark the latest twist in the versatile musician's career we caught up with him to discuss the ins and outs of his latest record.

How did British Plastic come together?

"British Plastic grew out of my wanting to make another record. I love the process of making music. I always regretit when it gets to the release stage as it's a lot of admin and chasing all the stuff that makes a record come together but it's a need within."

Did you write the record in the studio, on the road, in rehearsals, all of the above?

"I wrote and recorded as I went along, I had a small amount of money left over from the Babyshambles days so I sunk it into my own set up down in the depths of my garage. It's not perfectly produced but when budget is non existent it's the only way. I spent long hours trying to get to grips with learning the DAW (Logic) and learning to how to produce so like all my previous releases, it has an evolved sense of sincerity as a platform for my quixotic pop."

Do you have to be mindful of keeping the drumming stripped-back with RCK? And are there any tracks you're most pleased with on the album drum-wise?

"I purposely wanted to make the drums on this album sound more electronic, the initial plan was to tour as a three piece, two guitars/one bass and not have a drummer. I wanted the sonic punch of electronic music and didn't feel afraid of having no drummer, which is odd considering my background. Eventually we decided that the kids might be scared if they heard drums without a physical drum hitter so we drafted in skin hitter for the live shows.

"Approximately half the album has live drums on but I layered samples on top to get a bigger sound, I wanted to make the rhythm tracks more powerful than just an acoustic drum track. I think the drums on 'Here Comes The Summer' are my favourite as they have the drive of a live player and the punch of electronics."

What is it about singing drummers at the minute? Andy Burrows, Ronnie Vannucci, Ilan Rubin, they're all at it. Do you have any favourites? And do you think drummers are increasingly coming to the fore as songwriters?

"I think drummers are underestimated in terms of musical wealth, we get to sit at the back and absorb all that melody without worrying how to stomp around a stage, the other thing is that increasingly the money in music is drying up and publishing seems to be the only earner. If you're unlucky to be in a band that gives the drummer little publishing credit it's a tough ride. Hence, I think drummers are starting to flex a little more muscle in these changing times."

What else do you have on the way? Busy with London Guns? And any other drumming projects?

"I'm currently touring with RKC guitar and singing. London Guns is building nicely. I've also been doing lots of live percussion for electronic acts, I recently had a mega time playing the live percussion parts for Boy George. Regarding drumming I was playing with a very talented friend of mine but just couldn't find the time. I was offered to play for some X Factor type stuff but it's not really me. I need to be into the music before the money. I've never been one for session type stuff for money, I'm quite a purist. My music is a little more special to me."