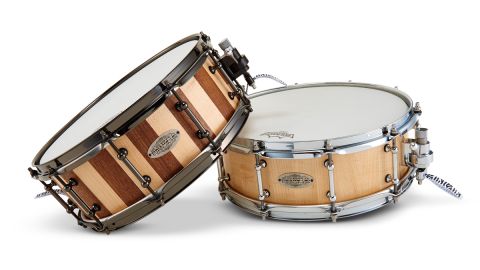 Sjoerd van den Beuken clearly has an aesthete’s eye and ear for detail, as these drums do exactly what they are supposed to do, with no little flair. For the price, they’re a steal.

Since its formation in 2011, Netherlands-based Zebra Drums has been dedicated to the art of building stave shell drums.

Run by one man, Sjoerd van den Beuken, Zebra offers a completely personal service, creating what can genuinely be described as truly hand-built drums. Up for review are a pair of Zebra snare drums, an all-maple 14"x5" along with a 14"x5½" Hybrid (maple and black walnut).

Sjoerd van den Beuken began experimenting with making drums in 2006 whilst studying for a degree in constructional engineering. Already a drummer of some 13 years, he approached the challenge with what he describes as “logical thinking and endless persistence”, spending five years devising and then perfecting the technique he now employs, before launching Zebra Drums.

Sjoerd’s most striking achievement is to have designed and built an entire kit comprising free-floating shells (and yes, that does include the bass drum and floor tom!).

Most Zebra drums are commissioned as custom builds, with a turnaround of between 10 and 12 weeks being the average lead-out; at the time of writing a distribution deal with Drumazon in Cardiff was in the process of being set up.

Sjoerd named his company Zebra after the fact that he only uses quarter-sawn wood for his shells. Quarter-sawn wood is easily identified due to its straight, linear grain (as opposed to the flamed or burled grain visible in plain sawn wood).

The staves of a Zebra drum are always arranged in alternating light and dark grains, making for a subtly striped pattern, reminiscent of a Zebra’s markings.

This build process also ensures the grain is always vertical, making it easier for energy - and therefore sound - to travel through the wood. Sjoerd selects each batch of wood himself from a certified lumber yard, assessing both the quality and the environmental credentials of the raw material.

Before glueing the staves into a shell, Sjoerd cuts ridged fingerjoints into the meeting edges of each stave. Looking at the completed shells with the heads off you can pick out the meticulously detailed zig-zag effect at each join.

Beautiful though they are, the fingerjoints are there for solid engineering reasons, adding strength and rigidity. As with all stave drums, the shells are initially thicker than the finished drum so that they can be rounded off to a perfect circle on the lathe.

Both of the snares on review for this issue are 8mm in thickness. Generous snare beds are found on each drum, while the bearing edges are among the most accurately cut we’ve ever come across.

Angled at 45° on each drum, the Hybrid model has a larger roundover towards the outside while the maple drum’s peak is placed slightly closer to the outer edge, giving it a smaller roundover. Sjoerd van den Beuken varies the bearing edge according to the wood and dimensions of individual drums.

To date, Zebra drums have been sealed with a coat of semi-matte oil finish and the review drums are no exception. Appropriately understated, it’s a simple layer of protection that allows both the natural elegance of the wood and fine craftsmanship to take centre- stage. Sjoerd offers a completely matte option and is working on a glossier variant; he is also happy to stain the wood in any requested colour, but to my eyes the current finish is spot on.

The shells are dressed with Taiwanese hoops, tube lugs and tension rods (in black chrome for the Hybrid), while a Trick snare throw-off and butt-end, Canopus snare wires and Remo heads complete the specs.

With such stunning looking drums we admit that it’s not without a degree of anticipation that we put stick to head. From the first tentative tap, it’s clear that they sound every bit as good as they appear.

Beginning with the maple snare, we’re struck by the degree of expression it’s capable of. Controlled and dry when hit dead centre, as soon as the stick moves away it opens up with a bright, funky tone that snaps backbeats into line and brings stinging urgency to fills. Rimshots complement and encourage the sound in equal measures.

In comparison, the Hybrid model is a fraction calmer and adds a generous twist of darkness to the proceedings. It possesses a deeper fundamental note that’s present in every aspect of its performance, from tuning to dynamics to choice of head - seemingly ingrained in the shell. It’s not about volume - it’s a pureness of tone (a common characteristic of stave drums) that will simply be heard wherever and however you place it.

Cross-sticking is rewarded with a strong and well-honed ‘clat’ from both drums; brushwork, meanwhile is reproduced with perfectly-nuanced clarity. It’s not often that we find ourselves struggling to offer a single criticism of review gear but this is one of those occasions; you could say that these drums have really earned their stripes.