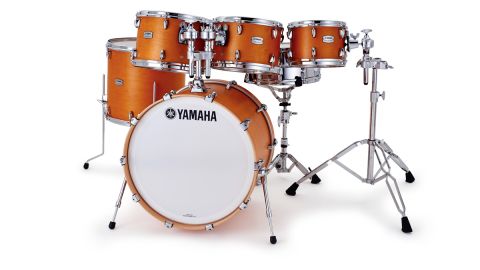 Filling the gap between Yamaha’s entry-level kits and the company’s expensive top lines, the new Tour Custom Maple is a professional quality no-frills kit, made in Taiwan to Yamaha’s strict specifications.

Yamaha’s Tour Custom brand goes back to the 1980s and has long been associated with a mid-priced kit offering.

This latest incarnation is an unfussy, all-maple shelled drum kit designed as an upper mid-market workhorse instrument for working drummers of all styles.

Yamaha claims that its kits are the most frequently requested by touring and festival supply companies and the aim of this kit is to fill that reliable workhorse slot. In the Yamaha hierarchy today’s Tour Custom is positioned above the Rydeen and Stage Custom entry levels and below the top line Live Custom, Absolute Hybrid, Recording Custom and Phoenix.

Yamaha aficionados may spot the similarity between this kit and the original Maple Absolute series of 1998 with its fixed bullet lugs and satin stain finishes. This new Tour Custom has six-ply shells, the outer and inner plies of which are American maple, while the inner plies are European maple, keeping the cost down a touch. Those outer plies are 1mm thick while the inner plies are 0.8mm, thus making up the 5.6mm total - Yamaha’s thinnest shell. Bass drums have sturdy, matching 8mm maple ply hoops.

The attraction of the American maple plies is that they have a more pronounced swirling grain pattern, though still more subtle than striking on our Caramel Satin review kit. It’s more obvious on some of the other four sweet-named finish choices - Butterscotch, Candy Apple, Chocolate and Liquorice. The satin surface is smooth and sleek on the outside and - if anything - more so on the un-stained natural sealed inside, where the grain pattern is actually more visible.

Whereas Yamaha’s top Recording Custom, Absolute Hybrid and Live Custom drums are made in the company’s leading-edge Chinese facility (Rhythm visited in 2015 and was mightily impressed) these shells are made in Taiwan. Yamaha’s Gavin Thomas reveals that, “The factory we are working with does a lot of other branded drums. They can build shells at a better price-point, but they make them to our exact specification, with diagonal seams, though not using Air Seal (Yamaha’s proprietary forming technology).”

They compare favourably with other Yamaha shells, with their distinctive diagonal, butted seams and quality finish. Likewise, the usual double 45° bearing edges are cut with accuracy and finished with care.

When it comes to the fittings, Gavin says, “It’s all our own metal work - the lug, tom holder, spurs, etc. It’s coming to Yamaha from the same company that supplies all our lugs and metalwork.” Indeed, the metal hardware includes several tried-and-tested designs. The sleek bullet lugs are the same as used on the old Absolute Series and are a Yamaha staple.

Likewise, the bass drum spurs are the simpler of Yamaha’s two core designs - that is, not the unique ‘L’ shaped locking type, but the more conventional straight, extending model.

The bass drum is topped by a fixed rack tom bracket. This is the traditional way of mounting which seems to be making a bit of a comeback and is fine by us. Into this mounting block slips Yamaha’s triple tom holder which allows plenty of height adjustment for the two top toms, plus a third slot, usually occupied by a cymbal arm.

The two small toms are fitted with Yamaha’s Enhanced Sustain System (Y.E.S.S.) mounts. This is a tidier, less bulky design than most isolation brackets, although the lateral reach of the short hexagonal rods is a compromise (that however doesn’t appear to trouble most drummers).

The most striking design innovation is the introduction of chromed-steel 2.3mm Inverse Dyna Hoops on the toms. Yet another vintage idea which is seeing a mini-revival, these triple-flanged hoops have a design reminiscent of vintage Sonor and Slingerland, characterised by the top lip bending over and in towards the centre of the drum rather than out, as with most hoops.

There are just two add-on drums for separate purchase - the aforementioned 14"x13" floor tom and a 13"x9" mounted tom (pictured). Gavin says, “To be honest, in all of our ranges that is all you ever need. Not many people are playing anything other than those sizes. There is no snare drum as we believe this will not be someone’s first kit, so they will have their own favourite snare, or they might be branching out to a metal snare or whatever.”

The Tour Customs of the sparser 1980s ranges was a professional set (championed by heavyweights including Larry Mullen and Cozy Powell), though pricewise undercutting the Recording Customs. Then in the 2000s the Tour Custom badged a more modest line with cheaper construction. This new incarnation is back to the professional ranks, though with an unfussy design and a Taiwan origin that keeps the price down. It’s not cut-priced though and it’s certainly not an amateur sounding kit.

In keeping with the workhorse objective, this is a cool kit without perhaps being one that sets the pulses racing too much. Yamaha drums are often understated, resorting less to bling than relying on a confident and un-showy professionalism of both image and build. This is seen here throughout, even in the badges, which are never the most eye-catching but rather project a discreet classiness.

So the fittings are superbly chromed, strong and secure but not overly massive, the lugs are small, neat and classically proportioned. The shell finish is smooth and tasteful. Designed then to appeal to the wider audience and not the flamboyant minority.

Yet all this is nothing if the sound is lacking. For review we have the larger 2F shell set which comprises a 22"x16" bass drum, 10"x7" and 12"x8" mounted toms and a 16"x15" floor tom. With the bona fide USA Remo Clear Ambassadors, thin maple shells and sharp 45° edges the sound is bright, quite bangy - open and loud, potentially rowdy. Good for live, in fact. And good for rock, although we are sure the smaller sized 0F kit, fitted with warmer heads, will do just as well for a more intimate jazz-tinged gig.

The 10"x7" tom has a lively ping, while the 12"x8" has a more rounded assault. Yamaha also sent an add-on 13"x9" mounted tom that reminds me just how much balls this size has. For whatever reason, 13s are often replaced by 12s in today’s kits, but if you want more body this one is a real belter, combining top-tom clarity and immediacy with a meaty, beaty, full-bellied roar.

Filling out the bottom, the 16"x15" floor tom sounds best when not too highly tuned, but when taking advantage of that big internal volume to growl and drive. A thin maple shell will give you that, plenty of mid-range gusto, which you can always control with damping if necessary.

The Inverse Dyna-Hoops have a cushioning effect, cosseting the head and shielding the edge. If they make any difference to the sound it is surely minuscule (Yamaha claims they control the natural maple overtones and focus the fundamental shell tone), but they do feel cosy and look great. And you’ll appreciate them even more if you ever play rim shots on your toms.

Finally, the 22"x16" bass drum is a bruiser. This is a good classic depth, a 16" has more bottom than a 14" and more definition than an 18". A healthy compromise for most situations. Again, better to start with plenty of headroom and carefully rein it in, than be lumbered with a dull kick at source.

The tuning rods turn smoothly and feel secure and comfortable. Also, despite the fixed tom mount bracket, the drum is lighter than expected. This is the result of the thin shell, small lugs and shrewdly proportioned spurs (some modern spurs seem unnecessarily massive). So the drum is not too heavy for picking up and transporting.