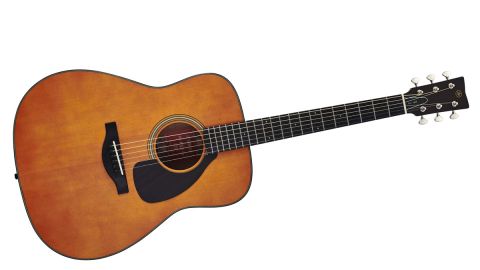 A good all-rounder that will suit many tastes and playing styles.

Anyone who went to buy an acoustic back in the swingin’ 60s would’ve been met with the same problem.

You either raided the piggy bank and looked at the high end of the market, which was the expensive imported USA ranges from the likes of Gibson and Martin, or you took your chances at the more affordable end of the price range. This quite often meant sundry anonymous torture devices from far-flung lands or, if you were lucky, you’d discover Yamaha’s early FG range.

Arriving in the midst of what James Taylor refers to as “the great folk scare of the 60s”, the Folk Guitar Range was the perfect antidote for novitiates with permanently sore fingers and tuning fatigue. Suddenly there was hope - a range of guitars that not only sounded perfectly reasonable and stayed in tune, but were a relative breeze to play. Furthermore, ‘Yamaha’ was the name appearing on the headstocks of some of the prime movers of the British folk movement - Bert Jansch, for instance, was an early adopter.

After quietly celebrating the 50th anniversary of the iconic red label acoustics in 2016, Yamaha decided it was time to revisit the range, employing some modern tweaks and upgrades along the way. What we have in the test area today is a from the reissued Red Label range, a Japanese-built FG5.

It’s interesting to note that, at first glance, the word that springs into your mind here is, obviously, ‘dreadnought’, but Yamaha insists that this is not the case, preferring to use its original term ‘Traditional Western’. In fact, the company says: “Yamaha was the first Japanese guitar brand to develop an original body shape instead of simply copying previous designs. The differences are subtle, measured in just millimetres, but the slightly wider body contributes to the warm FG sound...”

So there you have it. In fact, we compared the spec of the FG models here with Martin’s standard dreadnought size and Yamaha is correct in that, for instance, a Martin has a slightly longer scale length and a mite more body depth, whereas the Yamaha has a smidge more body width and the body is a whole 3.1mm shorter... and so on. Vive la différence!

The FG5 has Sitka spruce top, which Yamaha tells us is sourced from either Canada or Alaska, and it has been subjected to Yamaha’s Acoustic Resonance Enhancement - ARE for short - which is the company’s take on the practically universal torrefaction process where the wood is heated, and, in the company’s own words: “The ARE process gives the instrument a rich, vintage-quality tone, producing a sound like you’ve been playing it for years.”

It has solid mahogany back and side and it must be said that all-solid wood construction at this kind of price point is something we’re seeing less and less today, so kudos to Yamaha on this alone. Neck continues the mahogany theme, scarfed just under the Gotoh tuners and finish with the slight V-shape at the top of the headstock, which was a characteristic of those early FG models. In fact, reference is made to the red label lineage via the truss rod cover, which bears the words “Since 1966”. The fretboard is ebony, with 20 well-seated medium frets with pearl dot position markers in the accustomed places. The nut and saddle are both bone, while pickguard is designated as being ‘wooden type’. The bridge pins are ebony, meanwhile.

This guitar comes fitted with Elixir Nanoweb Light Gauge 80/20 strings - weighing in at a perfectly adequate 0.012 to 0.053 - and so the next thing is to hear what this instrument sounds like.

The finish on this instrument is referred to by Yamaha as being ‘semi-gloss’, but, by all accounts, could easily be dubbed ‘satin’ to our eyes. It gives an appropriate played-in feel, nonetheless. A few initial noodles reveal a good combination of treble and bass, the former perhaps a little on the light side, but no cause for concern to our ears. Chords have an appropriate amount of shimmer; using either fingers or a pick, single notes ring out clearly.

It’s a difficult one to describe, but this instrument just feels comfortable under the fingers - sleek, grown-up and mature, somehow. The action is slightly higher than we’d like, however. Sonically, we’re met with a good spread of trebles and basses, both fingerstyle and strumming being ably accommodated. The frets have been finished slightly well here with a good final polish.

The original red label Yamahas have become sought after on the collector market and, if this reissue is anything to go by, it’s easy to see why. Pitched in the lower-mid price range, it would keep a beginner to semi-pro happy for years. All in all, it’s a good all-rounder that will suit many tastes and playing styles, so we’d like to say a hearty welcome back to these iconic instruments and, who knows, if you come across one, you might want to have a red label day of your own.