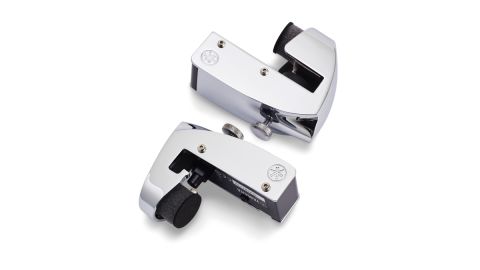 For £55 (plus a module), this is just another great reminder of how easy and affordable it is to ‘go hybrid’. Not having to ever clap at the start of Carwash again is worth the ticket price alone.

Triggering drum sounds used to be frowned upon by purists, revered by pedal-heavy metallers, and pretty much ignored by everyone else outside the world of pop sessions.

These days, however, triggering hasn’t just become ‘more acceptable’, it’s pretty much a standard practice for drummers of all genres. There’s no getting away from it (not that we see any reason why you’d want to), ‘hybrid drumming’ - that is, mixing up electronic sources with your acoustic kit sounds - is here to stay.

With this realisation comes advances in technology, and Yamaha, Roland and Alesis all offer boxes that allow us to bolster the authenticity of our live sets with the ‘correct’ samples.

But you still need a way to fire off that extra level of sophistication. With two new DT50 models just launched, the safety’s off, let’s pull the trigger...

Yamaha’s certainly not new to triggering electronic sounds, it’s been in the e-kit game for decades, but in recent times, its focus has been directed towards pads and brains, rather than triggers for acoustic drums.

Its DT-10 and DT-20 models are designed for single-zone, internal mounting directly on heads, but the new DT-50 models are a different breed. Straight out of the box we’re met with a sturdy lump of chrome, weighty with its die-cast construction.

The triggers fit to the rim of your drum, and fasten with a thumb-screw to keep them in place. The 50S is designed for snare or toms and contains two piezos, one activated when you hit the head of the drum, and one for the rim. This translates to two separate sounds from the one trigger (although you’ll need to plug it into a compatible socket on your module). The 50K, on the other hand, is a single-zone unit, and is designed to be clipped in the same way to your bass drum’s hoop.

Of course, triggers themselves produce a pulse signal rather than actual sound, so we tested the DTs on a supplied DTX502. A common problem with triggering (particularly multiple zones from the same drum) can be crosstalk, where hitting one surface causes another to trigger.

But we’re pleased to report that we experienced very little of this, and once we got our module settings right, complete separation between the rim/head. They’re sensitive too, picking up every nuance of our buzzrolls without mistriggering or dropping notes.

Current Yamaha module owners might need to upgrade their firmware to get the most from the DTs, but we also tested them successfully on a Roland TM-2, so you’re definitely not bound by the make of your module.