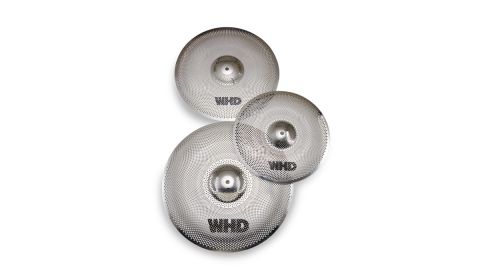 These quiet practice cymbals do exactly as they promise to do. Without doubt a massive step up from plastic or rubber pads in terms of musicality, and they won’t break the bank either.

Launched in 2011 and originally known as White Horse Drums, Gear4Music’s own brand, WHD, now boasts full acoustic and electronic kits, in addition to a selection of heads and three cymbal ranges.

The focus of this review is WHD’s new line of low-volume practice cymbals.

The practice metals look much like regular cymbals except for one stark contrast; a serious amount of holes! Most of each cymbal’s surface has been lost to hundreds of small perforations, starting 1cm from the edge, covering the entire bow and bell, and stopping about the same distance shy of the centre hole.

It will come as no surprise that the removal of so much material is the key to turning down the volume of these cymbals. Much like Zildjian’s L80 models, the WHDs claim to reduce volume by up to 80 percent in comparison with a normal cymbal. The other  element that sets these pies apart is the less conventional silver nickel finish. Despite making them slightly colander-esque (we had three people make that joke on separate occasions), the silver glimmer does give them a unique and interesting look.

Quickly set up with our normal teaching kit in the interest of a direct comparison, the practice cymbals are indeed whisper-quiet. That said, plenty of articulation can still be heard when playing the bow and bell without it feeling intrusive, and despite a lack of earplugs. Being able to fully crash an 18" cymbal without so much as a blink is definitely a novelty, and a nice alternative to sticking rubber pads on your cymbals.

Naturally, the holes make the cymbals extremely dry and give them a quick decay and, despite being described as feeling just like real cymbals, the stick response is very springy which takes a bit of getting used to. Nonetheless, these cymbals lend themselves perfectly to the practice room.