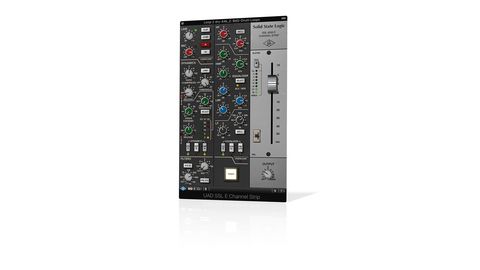 One of the most effective solutions out there for bringing the SSL sound to your DAW, but don’t expect to be able to run it on more than a few channels at a time.

Five years after the release of the SSL 4000 E Channel Strip plugin for UAD systems, Universal Audio has updated it to capitalise on the greatly increased power of the latest UAD-2 and Apollo platforms, and rebranded it with the standard “Collection” suffix.

Adding a few sizeable features and a completely overhauled engine, the new SSL 4000 E Channel Strip comes bundled with the original “Legacy” version (it wouldn’t be a collection without it!) for compatibility with old projects and a low-DSP alternative. In fact, you may find yourself needing the Legacy plugin more often than you might like, as the DSP draw of its successor is immense.

On our Apollo Twin Duo Mk1, one stereo instance sucked up a whopping 43% DSP and 20% Program Memory, while the Legacy version demanded just 14% of each. Disabling DSP Load Lock can help (at the expense of EQ nonlinearity, primarily), but this isn’t a plugin you’re going to be using on every mixer channel.

At the heart of the SSL 4000 E Channel Strip is a similar 4000 series console channel configuration to that of the Legacy version. The Dynamics section (modelling the 82E10 Rev 12) comprises a compressor and an expander/gate, while the four-band EQ centres on two fully parametric bands, flanked by switchable shelving/bell-shaped HF and LF bands.

The EQ can be flipped between emulations of the E Series’ Brown and Black knob filter circuits, black being the much sharper and more surgical option. The Filters section, meanwhile, houses 12dB low- and 6/18dB (Brown/Black) high-pass filters, and both they and the EQ can be independently positioned pre or post dynamics, or inserted into the dynamics sidechain.

The all-new Input section goes way beyond the simple gain knob of the Legacy version, modelling the full E Series preamp. Excitingly, it also comes complete with Unison integration for UAD Apollo devices, literally reconfiguring the hardware gain staging and impedance for monitoring and recording in real time through the excellent and powerful UAD Console application. The Flip button switches the circuit between Line and Mic level inputs, each with its own gain knob, and the Polarity and -20dB Pad buttons mirror those in Console when used in Unison mode, and are thus operable via the Apollo’s own buttons. The headline, though, is the Jensen transformer (we’re not sure which model) on the mic input, activated with the XFMR button. This works wonders in warming up the signal and introducing crunch and low-end attitude, and makes for a fantastic addition to the Unison preamp lineup.

Aside from an overall improvement in sound quality and non-linear analogue realism, the E Strip’s biggest new feature is the SSL preamp emulation, including Unison compatibility for zero-latency tracking and monitoring – see Jensen’s buttons.

At the other end of the signal flow, though, we now have a big, proper virtual fader as well as the +/-20dB Output knob. The fader adjusts the VCA output, subtly colouring the sound, whereas the Output knob is a straight volume control – add a (tiny) bit of saturation by pushing the fader past 0, then lower the Output gain to compensate for the volume increase.

And that’s it, really. Apart from the preamp, volume fader and repositionable filters, this is functionally the same E Strip we already know and love. The preamp is a big deal, though, and ultimately the most important change is to the sound.

Compared to the Legacy version, SSL 4000 E Channel Strip’s compression is fuller and punchier when pushed, while the EQ feels more present and a touch brighter at the top.

Overall, there’s more cohesion and openness (depending on how it’s set up), making the new E even better at tightening up kicks and basses, enhancing vocals and guitars, making drums snappier, and generally enabling mixes to be steeped in that upfront SSL ‘pop’ sound. A significant upgrade for UAD-2 users, and even more so for those with Apollo systems.