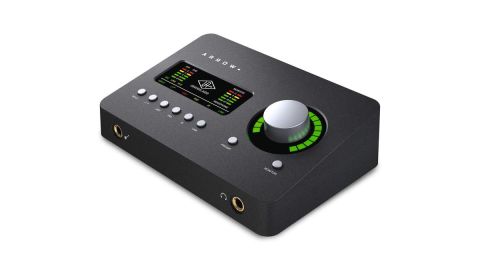 However, being externally powered, recording and mixing ‘on the go’ with them has never been an option - until now!

With Arrow, UA is at last offering what essentially amounts to a compact, bus-powered Apollo - no mains plug required. Not only that, but it has also made it its most affordable interface yet, at £140 less than the cheapest Apollo. Consequently, you get a bit less I/O than you do with Apollo, and no Core Duo or Quad DSP options, but, crucially, no compromises have been made when it comes to features and functionality.

There’s a Solo Core chip for powering the 14 included UAD-2 plugins (see Playing the Classics) and any others you might choose to buy, two Unison-enabled mic preamps, and the high quality converters for which Universal Audio are known. In other words, it’s pretty much the full Apollo/UAD-2 experience in a unit you can use anywhere.

As we’ve come to expect from Universal Audio (and, indeed, have every right to in any audio interface at this price point), Arrow is very well built - satisfyingly chunky, with a solid matt metal casing. It’s also nicely compact, with an 18x12cm footprint, and surprisingly light at just 0.63kg. Eminently portable, then.

Arrow is a Thunderbolt 3 device - the first of its kind, in fact. Thunderbolt 3 uses the same connector type as USB-C but isn’t the same thing, so potential Arrow owners should make sure that what appears to be the right port on their computer isn’t in fact USB-C. For Mac users, this is very straightforward: the current generation of MacBook Pro, iMac and iMac Pro include compatible Thunderbolt 3/USB-C ports, but the 12" MacBook’s identical-looking hole is only USB-C and thus won’t work with Arrow.

For PC users, the situation is less clear cut, of course, but there are now quite a few Thunderbolt 3-packing machines on the market, so just be very clear on your specs before you buy.

The stated reason for the use of Thunderbolt 3 rather than 1 or 2 is that it enables the bus powering that’s key to Arrow’s portability. The data transfer side of things is fully backwards compatible all the way back to Thunderbolt 1, however, so you could use an externally powered Thunderbolt 3 dock to connect Arrow to a Thunderbolt 1/2 computer.

Naturally, though, UA point out that this particular setup isn’t fully tested or officially supported. Plus, of course, mobility is one of Arrow’s big selling points, so if you’re going to lumber yourself with a power supply and dock, it might be worth stepping up to the Core Solo Apollo Twin MkII anyway.

The other consideration is the cable used to plug Arrow into the computer. Disappointingly, there isn’t one in the box, so you have to buy one separately, and again, it has to be specifically made for Thunderbolt 3 - USB-C won’t work.

For I/O, Arrow has two XLR/1/4" combi mic/line inputs, a Hi-Z guitar input (superseding mic/line input 1 when connected), two 1/4" balanced line outs and a 1/4" headphone out. What you lose in comparison to Apollo, then, is a pair of additional line outs and the eight-channel ADAT optical input.

First-class audio interfacing aside, as with Apollo, the real draw with Arrow is its ability to power Universal Audio’s UAD-2 plugins (VST/AU/AAX/RTAS) for low-latency (in Console) monitoring and tracking. The UAD-2 line-up comprises a comprehensive roster of astonishingly realistic classic hardware emulations, the same 14 of which are included with Arrow as with Apollo.

With the Core Solo chip only able to run a handful of more recent UAD-2 plugins at once (the Marshall Plexi Classic hits 30% on the DSP meter, for example), you won’t be processing an entire mix in real-time with Arrow. However, there’s more than enough juice in the tank to put together a complete monitoring and/or recording chain for your vocal mic and guitar.

UA’s excellent Console software hooks into Arrow for near-zero-latency mixing and monitoring with UAD-2 plugins, and loading compatible plugins into the two Unison preamps. Unison is UA’s breakthrough technology, reconfiguring the actual impedance, gain staging and other physical properties of the preamps for authentic emulation of both the sound and ‘feel’ of classic preamps, channel strips and guitar amplifiers. For guitarists and singers, this on its own could well make Arrow (or Apollo) nothing short of a must-have.

Away from Console, audio interface performance is as expected, with round trip (ie, input plus output) latency in Ableton Live of 10.2ms at 64 samples and 30.5ms at 512 samples. And most importantly, UA’s AD converters deliver the goods as always - without Unison processing, Arrow sounds absolutely pristine; with it, all manner of gorgeous analogue colouration is on the cards.

Well, UA has finally done it: Arrow is the mobile Apollo we’ve all been waiting for. Sure, Thunderbolt 3 might rule it out, depending on your setup; that Solo Core DSP quickly runs out of steam; and, like any heavy-draw bus-powered peripheral, it puts the serious smackdown on your laptop battery.

But none of that detracts significantly from the - for many - game changing ability to take your UAD-2 plugins, complete with glorious Unison preamps, on the road. A truly amazing thing.