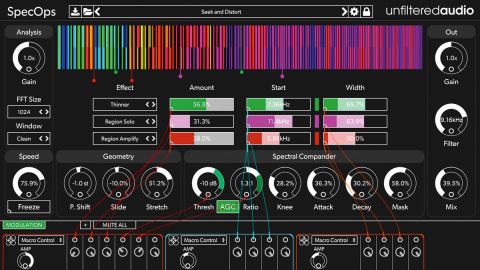 A spectral multieffects plugin from the maker of Sandman Pro and Fault, SpecOps (VST/AU/AAX) works by dividing the input signal up into hundreds or thousands of frequency ‘bins’ using a FFT (Fast Fourier Transform) algorithm, then processing those bins independently using three effects modules at a time from a library of 36.

It’s complicated, deeply transformative stuff - indeed, the manual goes into some depth on ways of avoiding various technologically inevitable issues that might crop up when using SpecOps, including CPU usage, latency and phasing on playback start. We found none of these to prove problematic when using the plugin, it should be pointed out, although the CPU hit is indeed hefty.

At the start of the signal path, the Analysis section is where you set one of SpecOps’ most important parameters: FFT Size. This is effectively the ‘resolution’ of the FFT frequency analysis algorithm, and it ranges from 128 to 32768 samples. The higher it gets, the smoother the sound, at the expense of transient impact; at low settings, the sound becomes positively crunchy. However, the specifics of all of this are down to what effects processes are actually applied, of course.

The FFT Window menu offers a range of windowing styles, named Leaky, Shiny, Glitchy, etc, the default being Clean. No explanation is given as to the literal differences between them, but each one has its own sound, acting a bit like a global filter in very loose terms.

After analysis, the signal hits the Speed section. Turning the knob anticlockwise reduces the rate at which new frames are generated and fills the spaces in between them with feedback. At 0% (or when the Freeze button is activated), the buffered frame is looped, turning it into a synth oscillator of sorts, for on-the-fly manipulation as a constant source signal.

The next stage of processing is the Geometry section. The Pitch Shift knob dials in up to 12 semitones of pitch shifting (ie, maintaining the harmonic integrity of the sound) in either direction, while Slide delivers a far greater range of ‘inharmonic’ frequency shift, raising and lowering all bins in a linear fashion, all the way to the very top or bottom of the audible range at either extreme. The Stretch knob compresses and expands the distribution of the bins for an alternative, grungier style of tonal shifting.

Having tailored the processing spectrum of the signal with the Analysis and Geometry sections, attention turns to SpecOps’ main event: the three multieffects slots, into each of which one of 36 spectral processing algorithms can be loaded. The frequency range covered by each effect is established using the Start and Width sliders (moving the former shifts the whole range up and down), while the depth is set by the Amount slider. The first two are represented visually in the display by colour- coded vertical lines, with what appear to be draggable handles at the bottom. Alas, these are just cosmetic - you can’t edit the ranges directly with them.

SpecOps’ amazing modulation setup lets you animate every control within the plugin, for rhythmic and dynamic changes over time. The pop-out Modulation panel houses up to six modulators, each configurable as an LFO, an envelope follower, a sample-and-hold generator, a step sequencer, a macro knob, or an input receiver for Roli’s Lightpad hardware controller. Routing modulators to target controls is done by dragging virtual patch cords between input and output ports, and there’s no limit to the number of outputs each modulator can serve or connections that can be made to or from any given port. Modulators can even be assigned to modulate each other and/or themselves.

The LFO comes in Sine, Saw/Tri and Square variants, and runs at up to 20Hz, synced or unsynced. The envelope follower features variable smoothing; and the S+H Noise module includes Phase and Slew controls for detailed shaping of the output. The Macro control does double duty as a straightforward offset knob for targeted parameters and a modulation summing bus for routing multiple modulators. The Step Sequencer is the highlight, though, running synced to tempo or free, with up to 16 steps and Slew control for adjustable smoothness.

Happily, the effects themselves are excellent, and with three of them available at a time, each covering its own discrete frequency range, there’s endless scope for combining them. They’re divided into six categories...

The Filters consist of full-bandwidth and region-targeted low-and high-pass filters, and two Noise filters, for removing all frequencies below or above the amplitude specified by the Amount slider. The Mixing effects include various boosting, attenuating and ‘thinning’ modules. Geometry comprises region-targeted versions of the Slide and Stretch algorithms; while Freezers plays host to six ‘time-stopping’ devices that expand on the main Freeze function with variable triggering probability, amplitude threshold triggering, scaled resonance and more. The Effects category brings together eight distortion, noise-boosting, smearing and reversing processes; and Glitchers pull off all sorts of deconstructive tricks.

After all that, the Spectral Compander section applies compression and expansion to every bin individually for wild dynamic treatments, and an analogue-style two-pole low-pass filter provides a final stage for reining in any high-end craziness that might well be occurring.

It’s immediately obvious on first launching SpecOps and blasting through the presets that it’s designed with the adventurous electronic musician in mind. Some work usually needs to be invested in getting things focused, but the rewards rarely fail to impress, whether you’re looking to add a flamboyant textural layer to a pad, robotise a vocal, colourfully crush a drum loop or sweep the entire breakdown of your latest opus. The wet/dry Mix control is crucial, of course, and the mesmerising FFT display is highly informative, showing spectral power across the frequency bins using colours or animated vertical bars.

Ultimately, while we’re not totally sold on SpecOps’ claimed utility as a conventional mixing aid (it’s just too edgy), as a creative spectral toolbox, it’s a triumph. The core concept works beautifully, the 36 effects are intuitive and spectacular, and the modulation system makes for a veritable playground of rhythm and motion. Unmissable.