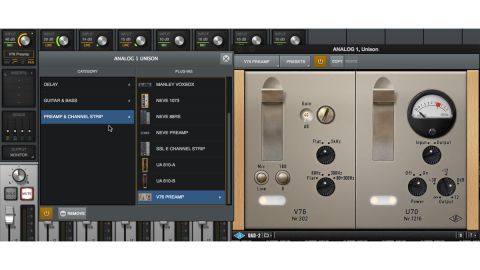 The new Auto-Tune plugin is the headliner, but, for all other purposes, the V76 Preamp is the one that’ll steal your heart.

Version 9.8 of UAD’s software is here and it brings three new emulations which offer a classic preamp, a significant upgrade to UAD’s Auto-Tune capabilities and a new amplifier model, developed with Brainworx. Notably, compatibility with the latest version of Mac’s OS - Mojave - is also now assured too.

The UAD platform isn’t short of classic preamp emulations and joining the Neve 1073 and SSL E-Channel ranks (to name but two) comes a less known but justifiably coveted choice; the V76 Preamp, whose hardware was developed by the German Institute of Broadcast Technology (IRT).

As with most classic preamps, its sound isn’t determined by an extended feature set or chameleon-like flexibility, but rather features a reputation built on the singular quality of its warm, ‘hi-fi’ tube sonic character. Here’s a preamp which really does sound like analogue in action, with UAD’s emulation the only officially-endorsed plugin of this hardware to date, with each stage of its behaviour meticulously modeled.

The original hardware has found favour in many of the world’s most celebrated recording studios and, as UAD’s emulation joins the ranks of its Unison-enabled preamps, you can now track recordings through it (vocals sound particularly great, as do hardware synths) or ‘re-preamp-lify’ existing audio recordings by adding the V76 as an insert at the top of a channel-strip of effects. The secret of its sonic richness lies in its tube gain stage, which gets warmer as the input level rises, helped by UAD having modeled every detail of the input and output stages, including the non-linear nature of its circuit. The result is sumptuous.

UAD’s partnership with Antares has hit its stride with the latest software update too. The Antares Auto-Tune Realtime Advanced. The interface contains two views: Classic Mode, which features pared-back controls, designed for speedy operation and an Advanced View which takes things further, particularly in sculpting vibrato response. As expected, both ‘sides’ of Auto-Tune’s personality are here, whether natural-sounding pitch correction, or the exaggerated, hyper-tuned effect upon which Auto-Tune’s reputation was founded. Pitch correction can either be applied via real-time analysis of the input signal, or via MIDI note input. Auto-Tune needs no introduction, but UAD’s updated version is a fresh take.

Finally a collaboration with Brainworx has brought about the Diezel Herbert Amplifier which offers ear-melting heavy rock distortion, emulating a 20-year old rock amp classic. Axe-wielding shredders will love it, but those favouring more aggressive electronic tones will too; for raspier synth lines, distorted basses and parallel crunch, you can take all things raspy to infinity and beyond here.

For many, UAD provides best-in-class effects processing. All three of the processors included in this latest release further enhance that reputation.