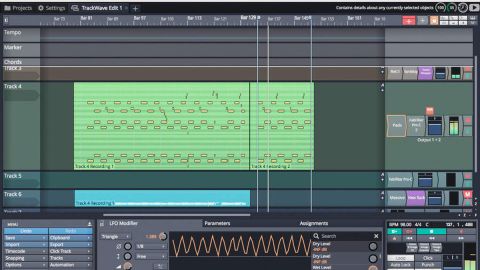 This is a true alternative - or complement - to your current DAW, once you’re used to how it works. Everyone should try it.

Bought by Mackie and left in a desert of under-development, in 2013, Tracktion was re-acquired by its original owners, who got straight back to work on it.

When the DAW hit version 8, it was given a name change, and now we’ve just reached ‘Waveform’ 9. This latest version introduces a Chord Track, a Multi Sampler, some customisable plugin ‘Faceplates’ and more powerful racks.

But forget the newest features for a moment - we have been guilty for a while of not paying enough attention to Waveform (and Tracktion), and so this review serves as a real catch-up for all versions. We’re ignoring potential v8 upgraders and asking another question: how good is Waveform 9 to the newcomer?

Waveform has a different way of doing things. Some of its foibles and eccentricities will leave you not unpleasantly surprised over why nobody else does it like that, while some of its idiosyncrasies might send you groping for the stress ball. For example? Well, Waveform’s audio export is a revelation - the resultant audio is ‘passively’ rendered in the background while you’re ticking options in the dialogue and before you actually click Render. Because of that, when you do click Render, the resulting le is often ready immediately. This is a perfect use of processor resources at a time when they’d otherwise not be used.

On the other hand, Waveform’s interface can be cluttered. Want to change tempo? You tried to drag where it says ‘BPM: 120’, didn’t you? Derp! In Waveform, you’ve got to click that once, then set your tempo via another dial that appears in the bottom panel. Once you know all the tricks, you’re golden, but the learning curve takes some time to ascend.

The rest of Waveform’s interface may be populated with text and text buttons at first, but the instantly familiar part to all producers is the timeline. Tracks are stacked from top to bottom as usual, but cleverly, Waveform makes no distinction as to the type of any given track - a track is a track. You can choose whether to have a mic input, a MIDI instrument, audio clips or the output of another track as any given track’s input. Actually, you can have four inputs and choose all of them at the same time, and then save that configuration as a preset to use again and again.

Down the right-hand side of the tracks is your mixer. Yes, we’re all used to faders running from left to right, but almost all DAWs give you vertically stacked control over gain, panning and the like as well. Waveform runs insert slots, levelling, panning, metering and mute/solo across vertically down the strip on the right. Due to public demand, you can access a ‘proper’ undockable mixer in Waveform too, but it offers up no more functionality than Waveform’s characteristic in-line mixer, next to the timeline.

Actually, the ‘devices’ you add into the slots are called ‘filters’ in Waveform parlance. You don’t even have to have the level/pan widget for a track if you don’t want to, although it loads by default. Another genius thing about this system is that you can add many types of device to do specific tasks. For instance, you load effects plugins in the exactly same chain and position you’d load an instrument. You could also load an Aux Send 3 widget on one channel, and an Aux Return 3 widget on another, and then move these wherever’s necessary - pre or post fader, for example. Sends and Returns in Tracktion, then, are versatile and limitless, although there’s far more menu diving than you might like to actually set them up.

Waveform takes a modern-day look at modulation. Similar to Bitwig Studio and Reason 10, Waveform 9’s Modifiers (formerly Track LFOs) are modulation sources hosted by Waveform and assigned to any plugin parameters of your choosing, on any track. It’s a joy to set up one LFO, Breakpoint, Step Sequence, Envelope Following, Random or MIDI-controlled device and see the hooked-up parameters of several plugins move, automation-style, with that modifier’s signal. This system should have been used by mainstream DAWs for years.

Everything in its wrong place?

Need to open another track? Actually, the last few tracks you worked on are already still open in the background - just in separate tabs. Waveform’s in-line mixer provides an unusual space for mixing duties, down the right-hand side of the tracks in the timeline, although a traditional mixer is available. The bottom panel is used as a sort of ‘Inspector’ for items you select at any time, with the built-in processors’ interfaces loading here too. Waveform 9’s Transport is housed in the bottom-right, looking decidedly compact, with Loop, Snap, Punch and Scroll buttons below. These probably could have been labelled as symbols to save space, though - space that would be appreciated for more comprehensive master metering down there.

Recently upgraded for version 9, Waveform’s rack system lets you set up a collection of plugins; then, as one unified processor (or indeed, instrument) - freely routing the signal path as you like, Reaktor-style, including the ability to split signals - recombine them, add sidechains, route MIDI, stack instruments and loads more. The result is a remarkably flexible - if frustrating to set up system that opens up infinite doors.

For everything you’ll like in Waveform, there’s something you won’t. Plugin sorting and scanning is done on-demand rather than when the software opens, saving you time sometimes but on the flipside ruining creative flow when you’re looking for a recently installed device. It’s easy to sidechain, with a source selector in the plugin window’s top bar, if you’re rocking VST 3 plugins. On the other hand, metering functionality in either mixer doesn’t feel forensic to the level that producers now demand.

Sometimes infuriating, but creative in spite of this, Waveform 9 has a true personality, and would feel at home as a second DAW on anyone’s hard drive.