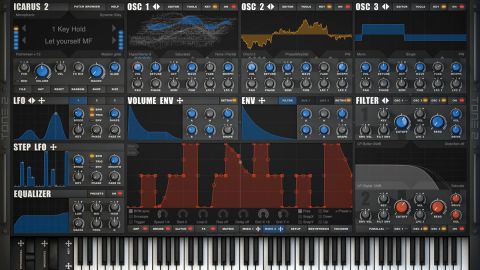 Tone2’s wavetable synth spreads its wings with a raft of new features, the best of which are the MSEGs and Glitch Sequencer

Tone2 are known for their expansive range of big, bold supersynths, including Electra 2, Gladiator 3, Nemesis and Icarus. The last of these has just received its first full version update, the headlines of which are the addition of an onboard drum machine, two multistage envelope generators (MSEGs) and a ten-module ‘Glitch’ effects sequencer.

For this review, we’ll focus on the new goodies in Icarus 2 (VST/AU), but first, a quick recap on the instrument as a whole. Icarus is a three-oscillator ‘multi-technique’ synth, with a focus on wavetables and resynthesis.

A sizeable selection of wavetables is included, and you can import your own single-cycle waves, complete wavetables and samples. Last year’s free v1.6 update added to the copious existing resynthesis methods with the option to have the melody of the imported sample programmed into the Arpeggiator or Step LFO.

A built-in editor facilitates manipulation of wavetables by directly ‘drawing’ the waveform itself, or adjusting the amplitude and phase of individual partials. And the all-important wavetable position control is joined by a Morph knob, which affects the playback and shaping of the wavetable based on a Morph Mode selected from an extensive menu of filtering, FM, AM, waveshaping, voice stacking and other options.

The oscillators feed into a pair of superb filters with a vast array of types and nine distortion modes; and modulation (prior to v2) comes in the form of four AHDSR envelopes, three LFOs with 48 shapable waveforms, a 16-step sequencer and the velocity output of the (excellent) arpeggiator.

The most attention-grabbing new feature of Icarus 2, then, is the Drum Sequencer, with which rhythm tracks can be triggered alongside your synth lines. One-shot samples (around 250 are included) and/or loops (automatically synced to tempo) are loaded into five tracks and sequenced in the usual X0X-style way.

Per-step Velocity sliders govern volume, while pitch can be tweaked directly and modulated by velocity; DSR envelope sliders shape the dynamics of each sample; and an effects send routes individual tracks to one of the three FX modules. The global sequencer rate and length are adjustable, and the bipolar Swing/Shuffle parameter brings the groove.

Given its ‘secondary’ status, the Drum Sequencer is appropriately simple but effective. It’s just a shame you can’t change track rates and lengths independently of each other to create polyrhythmic percussion lines.

Providing the means with which to design intricate rhythmic modulation shapes and sequences, we suspect the two host-syncable MSEGs will prove far more useful than the Drum Sequencer for most Icarus users. Any number of breakpoints can be clicked in, and the lines between them curved by dragging.

• Vengeance-Sound VPS Avenger
Totally inspiring, utterly absorbing, ridiculously versatile and sounding phenomenal, VPS Avenger is quite unlike any other synth out there.

• Dmitry Sches Thorn
Thorn is a world-class soft synth that we confidently predict will become a dance music production staple.

Tone2 suggest that Icarus 2 now qualifies as a ‘workstation’, but we’d take issue with that. Yes, the new drum sequencer and ability to use the MSEGs (and Arpeggiator) to ‘sequence’ individual oscs enables it to create simple tracks in a single instance, but that’s a long way from the true multitimbrality – ie, layering and keysplitting of multiple patches, and/or assignment of them to separate MIDI channels – that defines a workstation synth.

In fact, though the drum sequencer is capable enough, we could take it or leave it – we’d always rather program our beats in a dedicated plugin rather than a sub-section of a synth. That hardly makes its inclusion a bad thing, though, of course.

Icarus 2’s other big new features are unarguably transformative. The MSEGs bring a welcome increase in modulation scope, enabling a greater degree of complex parameter movement than is offered by the Step LFO. And the Glitch sequencer is an endlessly inspiring tool, upping the fun factor and introducing a wildly creative new string to Icarus’ bow.

There are heaps of other additions with version 2 as well, including 566 new presets (taking the total to over 1600), over 40 new waveforms, five noise LFO types, a preset browser, patch randomisation, MPE support, arpeggiator MIDI out, and a completely overhauled GUI with expanded scaling and sizing options (but still no animation of knobs in response to modulation, alas).

Sonically, it’s really a case of ‘much more of the same’, and while you will still either love or be indifferent to Icarus’ hyper-vivid basses, leads, pads, arps, keys, sequences and FX, there’s no denying the punch and spectral range of the synth, nor the staggering versatility of its architecture.

Ultimately, it’s an amazing instrument – particularly for producers of EDM, DnB, trance and other in-your-face styles – that’s priced right for newcomers and well worth the £72 upgrade fee from version 1.6.

MusicRadar verdict: Tone2’s wavetable synth spreads its wings with a raft of new features, the best of which are the MSEGs and Glitch Sequencer.

"Icarus 2 has a huge feature set, including the manipulation of wavetables, adding drum or glitch sequences, a multitude of filter and synthesis types, and powerful modulation.  It is one tough product to beat."
SoundBytes Magazine