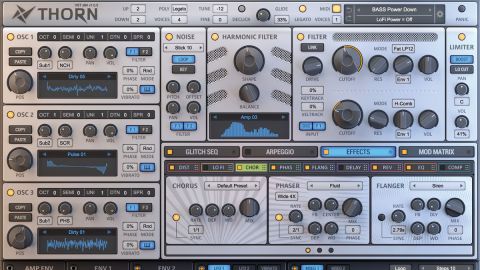 Thorn is a world-class soft synth that we confidently predict will become a dance music production staple.

Dmitry Sches’ second virtual instrument after the superb Diversion is a spectral synthesiser vying for ‘super synth’ status alongside the forward-thrusting likes of Serum, Dune 2 and VPS Avenger.

Thorn’s (VST/AU/AAX) architecture centres on three Harmonic Oscillators, the combined output of which is manipulated using a familiar arsenal of subtractive ‘analogue’ processors, and polished into a final sound with effects, an arpeggiator and the very cool Glitch Sequencer (see A Glitch in the system).

The three identical oscillators each generate a waveform from an editable series of 128 harmonics. In the pop-out Harmonic Editor, these are represented by vertical orange (amplitude) and blue (phase) bars, above and below the horizontal dividing line, and edited by drawing curves across the spectrum in one of four modes (Free, Odd, Even and Organ), or clicking in discrete settings for individual harmonics. A menu of shaping functions can be called on to transform the whole harmonic table (Boost Lows or Highs, Shift Octave, Randomize, etc), and a collection of preset tables is on hand for starting-point inspiration or use as is. You can even import the frequency profile of an audio file, which often yields interesting results.

That’s really only the beginning, though, as up to 16 harmonic tables can be defined per oscillator, loaded into the row of ‘frames’ at the bottom of the Harmonic Editor, for sweeping through, wavetable-style, with the Position knob. When tables are loaded into non- contiguous frames, the greyed-out intermediate frames smoothly interpolate between them; so even with just two tables set up, complex spectral shifts and sweeps are easily realised. Needless to say, the Position parameter is available as a modulation target, although we were disappointed to discover that modulation in Thorn isn’t visually animated at all, and that includes the oscillator waveforms.

A Glitch in the system

The sequencer runs at rates from 1/32 to 4/1, through up to 16 steps. Each module is controlled by a single slider in each step, governing gate time, filter cutoff frequency, bit depth, sample Rate, and number (and thus speed) of repeats. Modules are switched in and out using the power buttons at the left-hand end, while the R buttons on the opposite side randomise the sliders in each lane. A choice of two Sync options have the sequencer retriggering with each new note, or after the amp envelope Release stage; and the global Mix control blends the wet output with the dry signal.

The Glitch Sequencer is utterly brilliant, whether you just want to add a bit of funky pulsation to a pad by flinging the Gate and filters around, or go all-out with the Repeater or distortion modules to construct a searing lead or bassline. The icing on the cake is that it can be placed pre or post FX, enabling reverb and delay tails to be included or excluded as you see fit.

Beyond the Harmonic Editor, Thorn’s oscillators are very well appointed. Up to eight unison voices are on tap for each, as is a slaved Sub Oscillator with three waveforms, Phase and Vibrato control, and a wicked set of Oscillator FX. These spectral and modulation processes shape the waveform at the oscillator level and include Phaser, Chorus, Wah, Comb, FM, PWM, Ring Mod and Sync. They’re incredibly useful, providing an intermediate ‘enrichment’ stage between the raw oscillator output and the filter.

There’s a dedicated Noise oscillator, too, featuring a range of noise and percussive attack waveforms, and able to load external samples. It also serves as the FM/RM source for Oscillator 3.

The Harmonic Filter directly processes the harmonics generated by each Harmonic Oscillator, offsetting their amplitudes and phases according to the curve drawn in its own 8192-harmonic editor. The Shape knob moves the entire curve up and down the spectrum, while Balance tilts it towards the high or low frequencies. It’s essentially a very high-res EQ.

After the Harmonic Oscillators and Harmonic Filter, the rest of Thorn’s signal path is fairly standard fare. Each oscillator routes to either or both of two luscious resonant filters, featuring overdrive, a variety of low-, high- and band-pass types plus the formant-shaping Hypercomb, and arranged in series or parallel.

Modulation sources consist of two main LFOs, a Vibrato LFO, three ADSR envelopes, two very capable multi-stage envelopes/step sequencers, and all the expected MIDI messages. The usual ‘front-panel’ assignments are in place - ie, amp and filter envelopes - but every modulator can be freely linked to any number of parameters from throughout the synth. The list of targets takes in literally every single control, buttons included! Assignments are made by drag-and-drop or via a right-click menu, and viewed in the 27-slot Modulation Matrix, where ‘via’ sources can be added. It’s a spectacularly comprehensive system, although the aforementioned lack of real-time visual feedback on parameter movement really sucks.

Thorn’s Arpeggiator and nine onboard effects (Reverb, Delay, Distortion, Flanger, Chorus, EQ, Compressor, LoFi and Phaser) are every bit as impressive as the rest of the synth. The arp features note ties, adjustable gate time and step velocity, and Shuffle. The effects - which can be reordered as you see fit - are like full-on plugins in themselves, with comprehensive control sets including dry/wet Mix for every one and host sync where appropriate. Each effect even sports its own preset library.

Finally, the Master output section incorporates a limiter, a Low Cut filter for eliminating DC offset, and the excellent Boost circuit, which gives the low and high frequencies a bit of a kick for a bigger sound.

Thorn by my side

Much like other high-end soft synths in its class, Thorn’s massive, dazzling, hyper-real sound is largely down to the wild mobility of its oscillators, its copious and accessible effects, the pervasive modulation scheme, and the convincing analogue mojo of its filters.

Where it breaks new ground is in that innovative combination of spectral synthesis and wavetable-style ‘framing’ - a setup that works beautifully - and the amazing Glitch Sequencer. While edgy digital basses, leads, keys and FX are high on the agenda, it’s in its endless potential for unique pads, bonkers sequences and other modulation-heavy noises that Thorn is most engaging, inviting artistic experimentation while remaining admirably easy to program. A new classic in waiting.